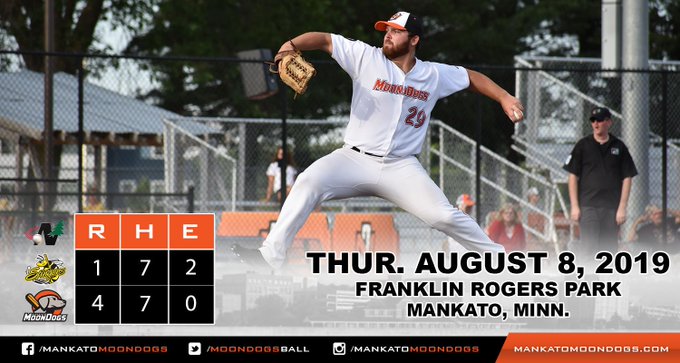 Mankato, Minn. – The Mankato MoonDogs knocked off the Willmar Stingers 4-1 on Thursday evening. A two-home run performance and an excellent outing from a veteran starting arm were the deciding factors in the Dogs sixth straight win.

Willmar got on the board in the first. A single from Justin King (Alabama) drove in the only run of the game for the visiting Stingers. The 1-0 lead lasted only until the bottom half.

Then it was the MoonDogs turn and they didn’t look back. Cuba Bess (Grand Canyon) got it started with a solo shot to even the score. However, the first-inning scoring didn’t end there. Later in the opening frame a fielder’s choice play off Sean Ross’s (Pensacola) bat scored Mikey Perez (UCLA) to give the Dogs a one-run advantage after the first.

From that point on it was a pitcher’s duel. Mankato added two more runs to ease the pressure in the eighth with another home run from Bess, his 4th of the summer, that also plated Nick Novak (Angelo State) to make it a 4-1. The MoonDogs eventually held on for their sixth straight win, a big one, with a tight playoff race in the works and three more games left in the regular season.

Bess swung an outrageously powerful bat on Thursday night. He went 2-4 with a pair of home runs for three RBI. He arguably led the MoonDogs to victory aside from the unbelievable outing they got from their starting arm.

With that being said, Brett Newberg (Austin Peay) had a night in arguably his last outing ever at The Frank. The fourth-year veteran southpaw allowed only one run in the first and was lights out the rest of the way. He went seven complete innings and allowed seven hits, three walks and struck out six. Josh Ramirez (Washburn) worked the eighth in relief, he walked and retired one on strikes. Jack Pilcher (Butler) was untouchable in the ninth. He notched his 4th save of the season and 2nd straight of the home stand. He did it by striking out the side.

The loss was handed to Willmar’s starter, Trevor Divinski (Minnesota State – Mankato), after he went five frames and surrendered a pair of runs. He was hit off three times and struck out a trio of Dogs batters.

Tomorrow the Mankato MoonDogs (35-34) play host again in game two with the Willmar Stingers (38-31). The ball will be handed to Fabian Muniz (Angelo State) as he will do the Dogs starting pitching. He will embark on his 3rd start of the summer when he throws out the game’s first pitch at 7:05 p.m. at Franklin Rogers Park in Mankato, Minn.