MoonDogs Wrap Up Season with Sunday Win Over Honkers 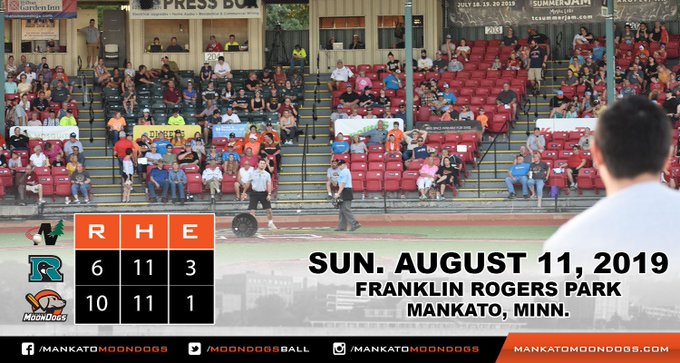 Mankato, Minn. – The Mankato MoonDogs won their season finale against the Rochester Honkers 10-6 on Sunday afternoon. The Dogs got it done by scoring in bunches, amounting four multi-run frames in the ballgame.

Rochester got on the board in the third. It came from a pair of runs batted in, one came from Mitchell Allen (New Mexico State University) who hit a single and the other was off A.J. Miller’s (Oregon)bat after he slapped a double. The Honkers held a two-run lead after the top half however, the Dogs had other plans.

The MoonDogs responded quick in the bottom half by plating a pair of runs. Nick Novak (Angelo State) drew a bases-loaded walk that allowed Tanner Craig (Evansville) to score with ease. Mikey Perez (UCLA) later drove in Brett Newberg (Austin Peay) via a sacrifice fly. The score was all even at two after the third inning.

The Honkers took the lead again in the fifth just to turn it over to the MoonDogs. After Rochester left the yard with a solo shot, the Dogs put up a three spot to counter for a two-run lead. A defensive miscue allowed the speedy Novak to score with ease after he stole two bases prior to the ball being put in play. Jake Moberg (UCLA) had a big hit when he doubled to score Cuba Bess (Grand Canyon) and Perez. The score was 5-3 after the fifth frame at The Frank.

The fifth inning seemed to be a trend as it repeated itself in the sixth. The Honkers hit another solo home run just to get outscored in the frame 3-1 a second time. Mankato put runs up with big power the second time around. Bess blasted a two-run home run and Josh Elvir (Angelo State) followed it up two batters later with another one, a deep solo shot to right center. The MoonDogs led the game 8-4 through six on Sunday.

A wild pitch in the seventh and another solo home run in the eighth brought the Honkers within two for a short while. Then the Dogs put it to rest, tallying another pair in the bottom half of the eighth to put the game on ice. A wild pitch and sac fly hit by Elvir did the damage to increase the lead to 10-6. The game wrapped up in the ninth when solid relief pitching struck out the side.

Player of the Game at The Frank for the Dogs was Moberg. He hit his way to a 2-for-5 day that saw him hit a double that put a pair of RBI on the board and in his line.

Eric Newman (Crown College) earned the win for the Dogs in his first outing out of the starter role for Mankato. He went six innings, allowed seven hits, four runs, two walks and retired a trio on strikes. Damon Maynard (Olney Central CC), the everyday catcher, came in for his first relief pitching appearance of the summer in the seventh. He was hit off once and allowed a run and mixed in a walk to his bullpen outing. Newly acquired, Dalton Hinsch (Northern Iowa) made his MoonDogs debut in the eighth. He surrendered a pair of hits that resulted in a run. He also walked one in the process but retired three. Jack Pilcher (Butler), the MoonDogs closer, pitched the ninth. He gave up a hit but struck out the side to notch the Dogs final outs of the 2019 season.

The Honker’s starter was Evan Layne (Lake Erie College) on Sunday afternoon. Layne pitched four frames and surrendered two runs (one earned) on three hits. He walked a pair and struck out a trio of MoonDogs batters. Rochester’s reliever, Casey Nimmo (San Diego Mesa), pitched in the fifth and was handed the loss for surrendering the lead. The Dogs scored three runs (one earned) against Nimmo. A pair of hits and a walk did most the damage.

Sunday’s game was the finale to the 18th season of Mankato MoonDogs Baseball. Following the 10-6 victory over the Honkers on Sunday, they finished the 2019 campaign with a 36-36 record.