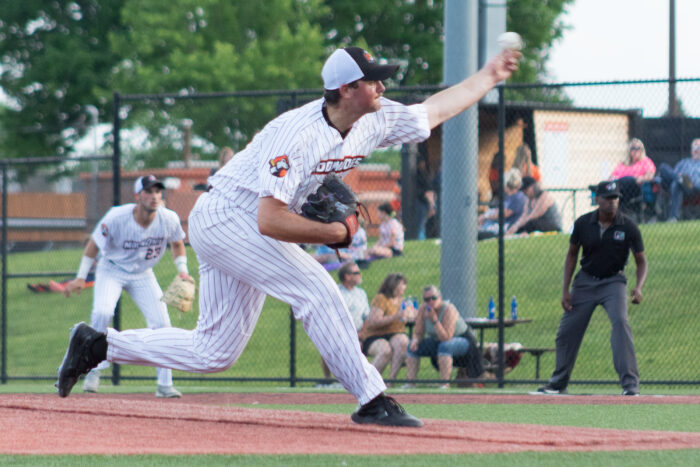 With its second straight victory, Mankato improved to 8-4 on the season and completed a sweep over Eau Claire at home. The Express now stand 7-5 on the season.

Starting on the mound and earning the win after pitching five and a third shutout innings with one hit against was Donovan Schultz (Evansville). Schultz improved to 2-0 on the season in the victory. He walked two opposing hitters and struck out five others along the way. In relief, Corey Sanchez (San Jose State) got a hold and pitched 2.2 innings before Simon Gregersen (Des Moines Area CC) picked up his first save of the summer in the ninth.

Derek Shoen (UMary) drove in the first run during the second inning of Saturday’s contest for the MoonDogs. Shoen’s single to left drove in Sean Ross (Indiana State) and gave the MoonDogs a 1-0 advantage after two innings of play at ISG Field.

In the next inning, Charles McAdoo (San Jose State) launched his first home run of the summer, a solo shot, out to left to make it a 2-0 game. Later in the inning, the MoonDogs’ lead was extended to 3-0 when Ross singled to center to drive in Garrett Williams (Abilene Christian).

DOGS HOMER | This grandstand stanchion might be blocking the 💥BLAST💥 from @McadooCharles, but IT CAN'T stop it! #GoDogs

En route the loss, the Express only managed to get one hit, a short dribbler near the mound in the fourth, before ultimately being outhit 8-1 in the contest.

Coming down with the loss was Express’ starting arm Jack Brown (Minnesota State – Mankato), he fell to 1-2.

The MoonDogs and Express head to Eau Claire, Wis., for a pair of games at Carson Park, Sunday and Monday. First pitch for Sunday’s ballgame goes out at 2:05 p.m. in Eau Cliare.