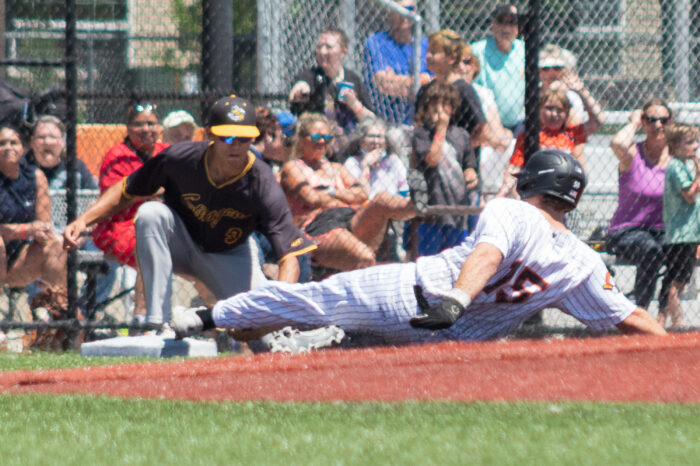 MANKATO, Minn. – The Mankato MoonDogs and Willmar Stingers split a Northwoods League baseball doubleheader at ISG Field in Mankato, Thursday evening. The MoonDogs picked up the win in game one, 10-5, before being defeated in game two, 8-5.

With the split of the doubleheader, Mankato and Willmar are both now 10-8 this season.

Both sides got off to quick starts in the first game of the doubleheader. Willmar opened the barrage with a three-run first inning. In the bottom half of the second inning, the MoonDogs grabbed the lead by scoring four runs before the Stingers evened the score in the top of the third inning. After three innings in Mankato, both sides were tied 4-4.

The MoonDogs took the lead and never looked back in the fourth when a fielder’s choice putout off the bat of Kai Roberts (Utah) drove in Davis Crane (Bellarmine) and a double that hugged the leftfield line from Sean Ross (Indiana State) plated Roberts for what was the eventual game-winning run. Mankato led Willmar 6-4 after the fourth frame.

After the MoonDogs piled on three more runs to take a 9-4 lead in the bottom half of the seventh, Crane blasted his first home run of the summer in the eighth out to center for a solo shot, which made it a 10-4 game.

Willmar rallied and scored one run in the ninth but was ultimately held there as Mankato prevailed with a 10-5 victory in game one.

Making his first start and picking up his first win in his second appearance of the season was Duke Benge (Air Force), now 1-0. Benge pitched seven innings with six hits and four runs (one earned) against and two strikeouts.

Mankato struck first in game two, scoring one run courtesy of a single blooped to center off Treyton Rank’s (Florida State) bat that allowed Derek Shoen (UMary) to score from second. The MoonDogs carried the 1-0 lead until the fourth inning.

In the fourth, the Stingers grabbed their first lead of the game by scoring a pair of runs. After they tacked one more run on in the top of the fifth to take a 3-1 lead, the MoonDogs queued up a rally that saw them score three runs in the bottom half of the inning to take a 4-3 lead. The first two runs scored

Pinch-hitting in relief for the Stingers in the eighth inning, Drey Dirksen (Augustana) blasted a no-doubt three-run home run over the fence in center. After Ross scored on a wild pitch for Mankato in the bottom half, the MoonDogs found themselves trailing the Stingers 6-4 heading into the ninth.

After Ross scored on a wild pitch in the bottom of the eighth to cut the deficit to one, the Stingers put salt back into the MoonDogs’ wound by bringing two more runs around to score to improve their lead to 8-5, where it would ultimately stand.

Starting on the mound for the MoonDogs, Nick Altermatt (Minnesota State – Mankato) pitched four strong innings en route to a non-decisive outing that saw him surrender two runs on five hits while walking and striking out three batters, respectively. Simon Gregersen (Des Moines Area CC) was handed the loss after surrendering the lead on Dirksen’s home run in the eighth. He now stands 0-3 on the summer.

The MoonDogs are back at home on Friday to host the first game of a home-and-home series against the Great Plains West-leading St. Cloud Rox. Donovan Schultz (Evansville) will deliver the first pitch at 6:35 p.m. for the MoonDogs.