MoonDogs Get Back into Win Column Hosting Stingers 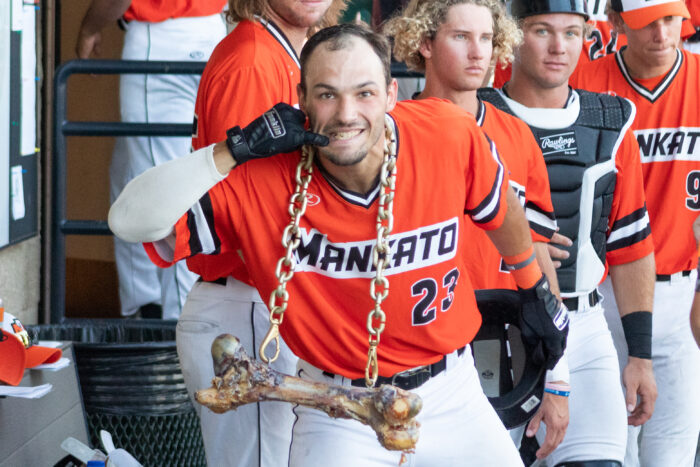 Coming out on top, the MoonDogs got back to even with a 12-12 record while handing the Stingers a loss, dropping them to 13-11.

The MoonDogs opened the scoring in Wednesday’s tilt during the second inning when Boston Merila (Minnesota) hit a high chopper near the second base bag that leaped over the middle infielders on a bounce and into centerfield to score a pair of runs. After two innings of play at ISG Field, the MoonDogs led the Stingers 2-0.

In the bottom of the fourth inning, Derek Shoen (UMary) launched his third home run of the season the opposite way, down the rightfield line and off the bottom-right corner of the videoboard at ISG Field. The round-tripper scored the MoonDogs’ third run of the game to make it 5-3 and stood as the game-winning run for Mankato.

After Shoen’s blast to right in the fourth, Both sides traded a run in the fifth before the Stingers came within two of the MoonDogs by scoring their second run in the top of the sixth to make it 4-2.

The seventh inning saw the MoonDogs take a 5-2 lead when Sean Ross (Indiana State) scored from third on a single to center by Justin DeCriscio (San Diego).

After entering the game to pitch in the eighth, Luke Young (Midland College – TX) locked it down to secure a two-inning save, his first of the season, as well as a 5-2 MoonDogs’ victory.

Starting on the mound for the MoonDogs, Drew Buhr (Bellarmine) pitched six complete innings to improve to 2-0 on the season. Buhr surrendered a pair of runs on five hits, walked one and struck out eight opposing hitters. In relief, Thomas Bruss (Augustana) pitched a scoreless seventh to pick up a hold out of the pen.

Next on the docket, the MoonDogs play host to the LaCrosse Loggers at ISG Field, Thursday night at 6:35 p.m. Corey Sanchez (San Jose State) is listed as the probable pitcher for Mankato.