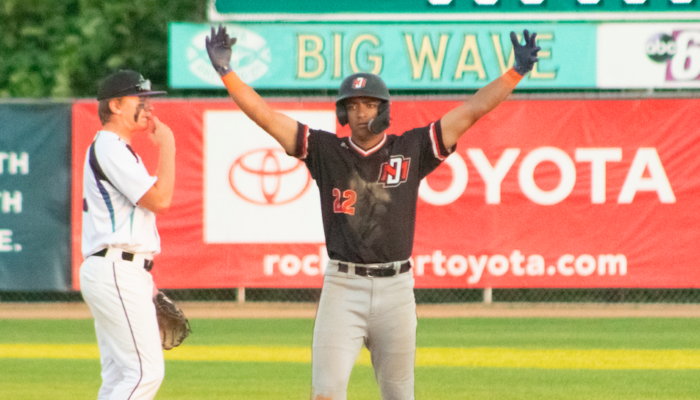 ROCHESTER, Minn. – The Mankato MoonDogs had their five-game winning streak snapped after a 9-5 loss to the Rochester Honkers, Saturday night at Mayo Field.

The MoonDogs now stand at 19-15 on the season following the loss while the Honkers are now 14-18 on the year.

Both sides took turns scoring runs over the course of the first six innings at Mayo Field, Saturday night. There were a total of six lead changes along the way. Rochester came out on top with a 7-5 advantage after six innings of play.

After the MoonDogs Merila scored once in the first and third inning with once answer in the second from the Honkers, Rochester scored two more times in the fourth inning to take a 3-2 lead. In the very next inning, Sean Ross (Indiana State) helped the MoonDogs take back the lead, 5-3, when he launched a three-run homer over the fence in left during the fifth inning. Ross’ team-leading fourth blast of the summer gave the MoonDogs their final lead of the contest after five innings of play.

The Honkers rallied late and piled on six unanswered runs to pick up the victory, including four runs in the sixth prior to another pair in the eighth. After the Honkers tied the game, 5-5, in the sixth, Alex Pimentel (Sacramento City) singled to left to score one run, which served as the eventual game-winning run in the 9-5 ballgame.

For the Honkers, Frank Craska (Lafayette) picked up the win after dealing three shutout innings in relief on the hill. He is now 2-1 on the season.

Simon Gregersen (Des Moines Area CC), now 3-4 on the season, came down with the loss after pitching an inning and two-thirds in relief of southpaw starter John Lundgren (North Alabama), who pitched the first four frames.

The MoonDogs will now spend three consecutive days idle in Mankato before heading to Eau Claire to open a new two-game series at Carson Park, Wednesday and Thursday.