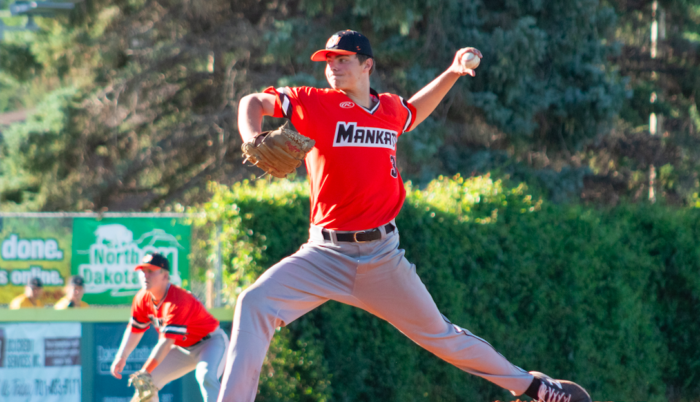 MoonDogs have now dropped three straight contests, bringing their record to 21-20 overall and 2-5 in the second half. The Larks improved to 14-27 and 3-5.

Mankato was held to six hits in the game and left eight runners on base. Derek Shoen (UMary) was the only MoonDog with multiple hits, batting two-for-four in his return to Bismarck, where he competes as a member of the University of Mary Marauders baseball team.

The Larks cracked the score column in the bottom of the third. With a runner on second and two outs, Aaron Mann (Drury) doubled to drive in a run, making it 1-0 after three innings of play.

The Larks were held in check by MoonDogs’ pitching for the following five frames until Jake Hjelle (Minnesota-Crookston) came up to bat in the eighth inning. After fouling off five straight pitches in a two-strike count, Hjelle hit a two-run home run over the leftfield wall to add a pair of insurance runs. The Larks held on the remainder of the evening to shutout the MoonDogs, 3-0.

Mankato mounted a one-out rally in the top of the ninth. Boston Merila (Minnesota) and Sean Ross (Indiana State) had back-to-back singles to put runners on second and first. Then, Simon Scherry (Evansville) reached on a fielding error to set the stage for a comeback down three with the bases loaded. Unfortunately, Mankato’s runners were stranded on back-to-back outs and the MoonDogs fell victim of a 3-0 shutout in the series opener.

TJ Martin (St.Scholastica) made his debut for the MoonDogs on Tuesday and pitched four solid innings with one run and five hits against. Sky Wells (Cal State – Long Beach), Cal Barna (Folsom Lake) and Alfredo Frey (LaVerne) also made appearances on the hill in relief for Mankato.

The MoonDogs rematch the Larks Wednesday night for game three on their five-game road trip. First pitch is scheduled for 6:35 p.m. at Bismarck Municipal Stadium.