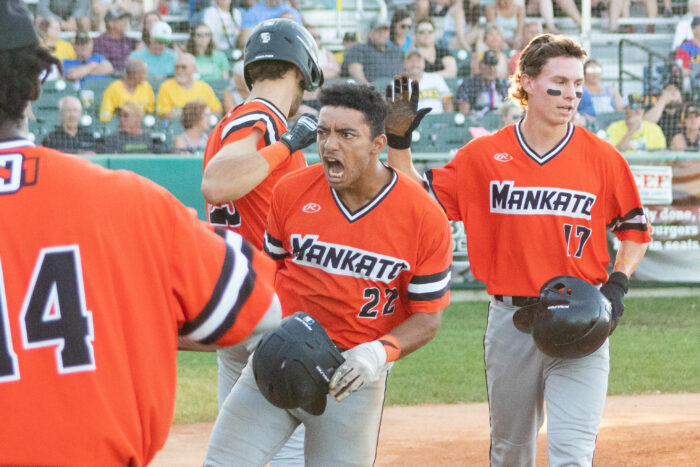 The offensive exploded Wednesday for 11 runs, following a night where it was shutout. The top batters were Sean Ross (Indiana State) and Kai Roberts (Utah). Both Ross and Roberts were two-for-four in the series finale against the Larks with a home run.

The scoring started in the top of the first when Ross reached on a walk and was later knocked in by Derek Shoen (UMary) for a 1-0 lead. Orlando Salinas (Kanas State) led off the second inning with a walk and scored later in the inning on a wild pitch to make it 2-0. After two innings of play in Bismarck, the MoonDogs led the Larks 2-0.

In the fifth, the MoonDogs tacked on three more runs with a pair of back-to-back long balls. After Dustin Crenshaw (Grand Canyon) reached to open the inning, Ross hit his team-high seventh home run of the season over the leftfield fence for two runs. In the next at bat, Roberts hit his first home run of the summer out to right to make it 3-0.

The MoonDogs went on to score six more runs throughout the final four innings. Ross and Roberts finished the contest combined for seven RBI.

Drew Buhr (Bellarmine) picked up the win and improved to 3-0 following a masterful day. He threw six strong innings and struckout eight in the big start. Tasei Yahiro (Grand Canyon) pitched two innings to maintain the shutout before Michael Gurka (Minnesota) came in and shut things down in the ninth.

The MoonDogs continue their five-game road trip in Duluth at Wade Stadium Thursday against the Huskies at 6:35 p.m.