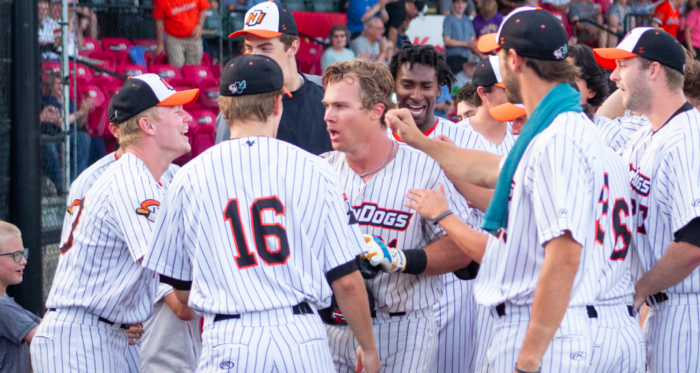 MANKATO, Minn. – The Mankato MoonDogs roughed up the Duluth Huskies for a 6-1 victory in a Northwoods League baseball game, Saturday night at ISG Field.

The scoring started in the bottom of the fourth frame when Angelo Peraza (San Diego) clubbed a two-run triple over the head of the Huskies’ centerfielder and into the alley in right-center. The three-run fourth was capped by an RBI single through the right side of the infield by Mikey Gottschalk (Minnesota State – Mankato). After four innings of play at ISG Field, the MoonDogs led the Huskies, 3-0.

John Newman Jr. (Santa Barbara) tacked one more run onto the lead with a solo home run over the fence in left during the fifth inning. Newman’s second blast of the summer put the MoonDogs up 4-0.

Duluth saw its first run of the evening cross the plate in the top half of the seventh when Kristian Campbell (Georgia Tech) advanced home in the midst of a throw down to second on a stolen base. After Simon Scherry (Evansville) roped an RBI single down the leftfield line and Charles McAdoo (San Jose State) hit a sacrifice fly to left for a pair of runs, the MoonDogs found themselves grasping a 6-1 lead over the Huskies.

Mankato held Duluth in check for the remaining two innings to pick up their second straight win by a final score of 6-1.

Corey Sanchez (San Jose State) was the starting arm for Mankato on Saturday night. Sanchez picked up the win to improve to 3-1 after dealing seven innings of two-hit baseball with one run against. He walked one and struck out seven along the way. In relief, Alfredo Frey (La Verne) and Tyson Neighbors (Kansas State) dished out scoreless and hitless eighth and ninth innings, respectively.

DOGS WIN | For the second straight night, @tyson_neighbors hung a zero on the Huskies in the ninth to secure another #MoonDogs victory! @corndog99999, now 3-1, earned the W.

Mankato and Duluth wrap up the two-game series Sunday at 5:05 p.m. at ISG Field.#GoDogs | #MoonDogginIt pic.twitter.com/z4LYbNzq4G

Altogether, the MoonDogs outhit the Huskies 14-2, Saturday night. Neither side had an error In the contest.

On Sunday, the MoonDogs rematch the Huskies back at ISG Field at 5:05 p.m. before heading into the all-star break.