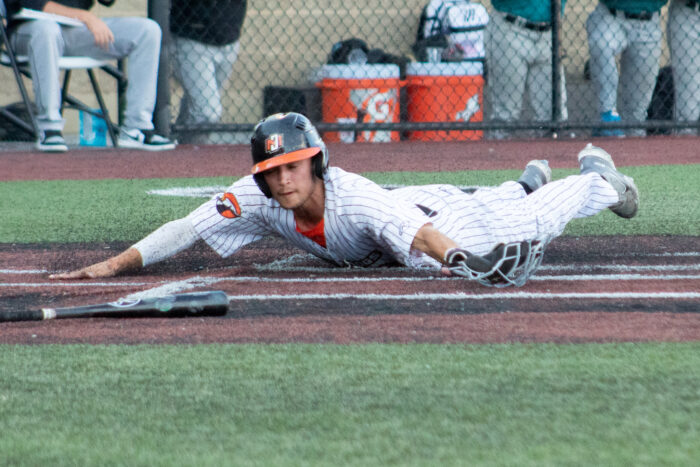 MANKATO, Minn. – For the second night in a row, the Mankato MoonDogs posted double-digit runs against the Rochester Honkers to win 11-3 during a Northwoods League baseball game played at ISG Field, Friday night.

The MoonDogs picked up their second win in a row to improve to 30-24 with an 11-9 mark in the second-half standings. The Honkers are now the latter following the loss, with a 24-30 overall record and 9-11 second-half mark.

In his first game as a MoonDog, Easton Fitcher (Minnesota) swung the hot stick. Fritcher, the youngest player on Mankato’s active roster, sported a three-for-four night with a pair of RBI and a run scored.

Brendan Hord (Evansville) plated the first run of the game in the first inning for the MoonDogs when he slapped an RBI double to the left-center alley to bring Kai Roberts (Utah) around to score from first, giving the MoonDogs a 1-0 lead over the Honkers.

The #MoonDogs have struck first thanks to this RBI double by @brendanhord! #GoDogs

Mankato piled on another pair of runs in the second inning to make it 3-0. New to the MoonDogs’ roster, Fritcher recorded a hit up the middle in his first at bat for his first RBI. Next up, Sean Ross (Indiana State) made his presence felt by following suit with an RBI single of his own.

The third inning saw Rochester break into the score column with two runs to shrink the deficit to 3-2 before Mankato tacked on two more, making it 5-2 after four innings of play. The runs were tallied thanks to an RBI ground-rule double by Roberts and RBI grounder from Charles McAdoo (San Jose State).

.@kairoberts00 DOUBLES the lead with a ground rule DOUBLE! #GoDogs

After the Honkers came within two of the MoonDogs by scoring another run in the sixth, McAdoo made it a 7-3 ballgame by slugging his fourth home run of the summer off the overhang facing of the Dog House Suites in right at ISG Field.

Once the MoonDogs scored one more run in the sixth to go up 8-3, they scored one more time in the seventh and twice more in the eighth and eventually rode an 11-3 margin to victory, completing a home-and-home series over the Honkers.

Corey Sanchez (San Jose State) pitched five and two-thirds of an inning while making his sixth and final start of the summer for the MoonDogs, where he picked up the win to improve to 4-2 on the season. Sanchez struck out a pair of hitters during his final outing in Mankato while surrendering seven hits for three runs. In relief, Alfredo Frey (La Verne) and Sky Wells (Cal State – Long Beach) each pitched more than an inning of shutout baseball.

The MoonDogs pack their bags in pursuit of Riverfront Stadium in Waterloo, Iowa, next as they prepare to take on the Bucks the next two days. The series begins Saturday night with first pitch slated for 6:35 p.m.