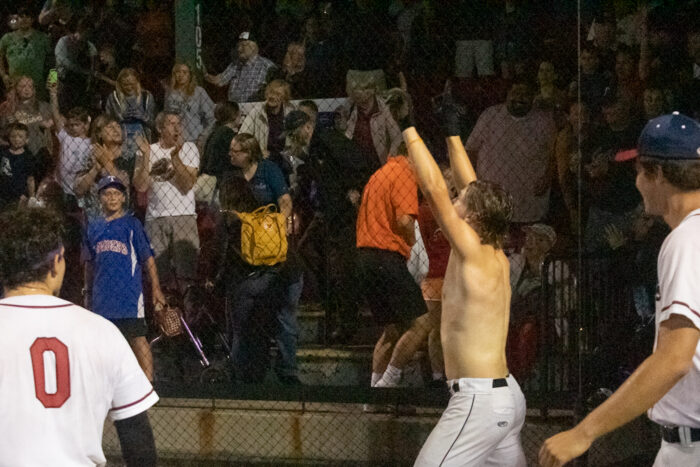 MANKATO, Minn. – Thanks to ninth-inning heroics displayed by Dustin Crenshaw (Grand Canyon), the Mankato MoonDogs were walk-off winners over the Eau Claire Express, 5-4, Thursday night in their final game at ISG Field of the 2022 season.

Kai Roberts (Utah) got the rally started as the MoonDogs’ leadoff hitter in the ninth. His diamond-cutter of a base knock put the tying run on first with no outs for Derek Shoen (UMary). Shoen wasted no time tying the ballgame when he slapped the third pitch he saw the other way in the right-center alley for a triple that tied the game 4-4. In the next at-bat, Crenshaw crowned the MoonDogs victorious with a single up the middle that allowed Shoen to score from third.

Prior to all the pandemonium, Eau Claire broke into the score column first in the top of the fourth frame thanks to a solo home run that hugged the leftfield foul pole off the bat of Jake Sapien (Stanford). After Reed Latimer (Montevallo) launched another home run of the two-run variety in the sixth inning, the Express grasped a 3-0 lead over the MoonDogs.

After Orlando Salinas (Kansas State) knocked a double to left to cut the deficit to two in the sixth, Roberts and Shoen also claimed RBI knocks in the seventh to even the score at 3-3.

The Express reclaimed the lead in the top half of the eighth when a run crossed the plate on a wild pitch, which made way for a historic and memorable finish in the ninth. The home finale ultimately ended with the host MoonDogs picking up a 5-4 walk-off win over the Express, Thursday night in Mankato.

Leading the way offensively, Shoen was two-for-five with a pair of RBI while Roberts was three-for-five in the ballgame with a run batted in as well.

Picking up the win after pitching an inning and two-thirds in relief for Mankato was Jakob Meyer (Evansville) to improve to 3-0 on the summer. Starting on the mound for the MoonDogs, Kobe Lovell (Southwest Minnesota State) pitched six innings of three-run ball en route to a non-decisive outing.

With the home portion of their schedule now by the wayside, the MoonDogs finished with a 25-11 record when competing at ISG Field in 2022. Now 39-27 overall, Mankato travels to La Crosse the next two nights to close out the season with a two-game series against the Loggers at Copeland Park. Both games start at 6:35 p.m., Friday and Saturday.