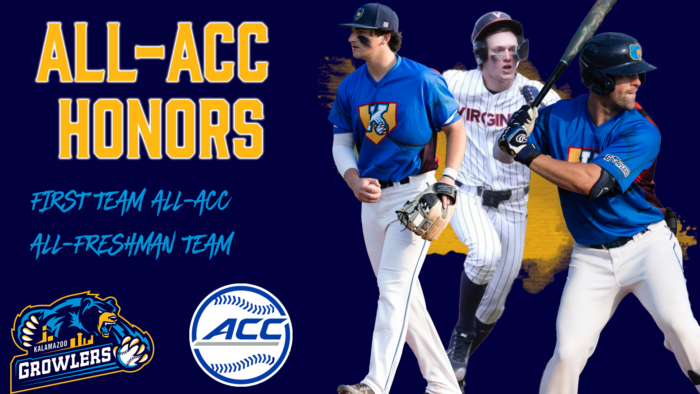 KALAMAZOO, MI –The Atlantic Coast Conference released their All-Conference first, second, third and freshman teams on May 23rd with a list featuring two former and one future Kalamazoo Growler players. All three players play their collegiate seasons with the top-15 Virginia Cavaliers and will begin ACC tournament play on May 25th against Florida State.

Jake Gelof and Alex Tappen, both members of the 2021 Growlers roster, were named members of the All-ACC first team after impressive seasons for both players. Tappen, a graduate senior outfielder, slashed .350/.412/.612 during the 2022 regular season for UVA and tacked on 13 home runs. Jake Gelof, a Dick Howser award semi-finalist, was among the best hitters in all of division one baseball this season, posting a .376 batting average with 74 RBI and 19 long balls.

Griff O’Ferrall, who will join the Growlers in a few weeks, was named to the ACC All-Freshman team after a more than impressive first season of power five baseball. In a little over 200 at-bats for the Cavs, O’Ferrall slashed .324/.424/.386 and racked up 8 extra-base hits, 39 RBI and 17 stolen bases. O’Ferrall will appear in a Growlers uniform after Virginia concludes post-season play for the 2022 campaign.

Congratulations to these Growlers past and future on earning this tremendous honor! We look forward to seeing how their season ends up and wish them the best of luck!