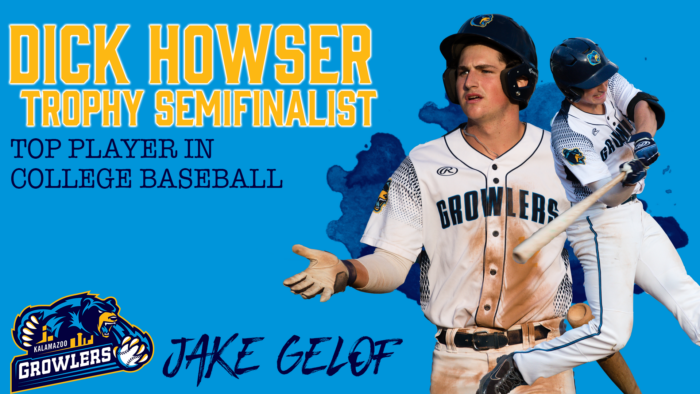 KALAMAZOO, MI –Current Virginia Cavalier and member of the 2021 Growlers team Jake Gelof has been named a semi-finalist for the Dick Howser Award, given to college baseball’s best player based on both on and off-the-field categories. Gelof slashed .376/.477/.768 during the regular season in 2022 with the Cavs and logged 19 home runs, 15 doubles, and 74 RBI.

The Dick Howser award, whose namesake was an All-American shortstop at Florida State, is given to a player that excels in onfield performance, off-the-field leadership, and all-around character as both a person and a ballplayer. The award winner will be announced in Omaha on the eve of the College World Series opening game on June 17th.

Both Jake Gelof and his older brother Zach are former Growlers. Consequently, they have enjoyed enormous success in their careers, with Zach currently among the best hitters in the AA Texas League and Jake not far off from what should be an early-round pick in the MLB Draft.

The Growlers want to congratulate Jake Gelof on his nomination and tremendous success this season and wish him the best of luck going forward!

Come out to Homer Stryker Field to see potential future award winners from across college baseball in a Growlers uniform all summer long!