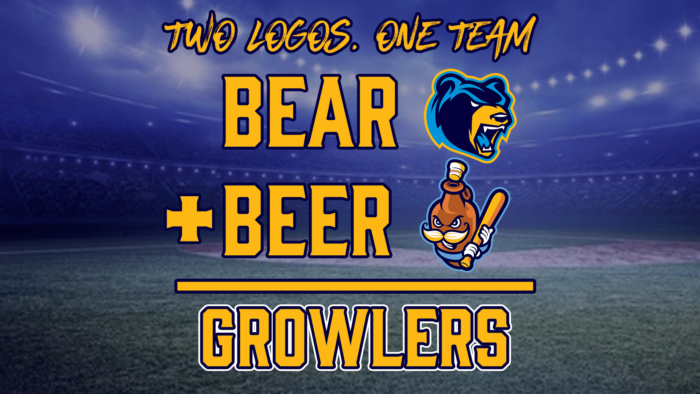 Kalamazoo, MI – Bear+Beer=Growlers. The Growlers have announced the Growler Jug logo as an official alternate. In April of 2022, the Growlers unveiled a brand new specialty logo; The Growler Jug. This logo represented the second meaning behind the team’s name. The name “Growlers” has always had two meanings but the team’s original logo of a fierce, growling bear only represented one of those meanings.  Now with the announcement of the new alternate logo, the team will permanently represent the other meaning behind the Growlers name – beer. Because Bear+Beer=Growlers.

The logo is a fierce, brown jug with a handlebar mustache ready for battle with bat in hand. The logo represents a “growler,” a glass or ceramic jug used to transport draft liquids frequently sold at craft breweries, microbreweries, and brewpubs. Growlers are a staple in breweries because of their ability to hold carbonation indefinitely, and for upwards of a week when first opened. They can also be refilled when empty.

The jug logo also pays homage to the rich history of beer in Kalamazoo. According to the 2019 data by C+R Data, Kalamazoo has the 5th-most breweries per 50,000 people with 10.  The most popular brewery is perhaps the most well-known brewery in the state, Bell’s Brewery. Bell’s has been a founding partner with the team since the inception in 2014.

Originally the logo was only a specialty logo that would last a few short games for the team. During the 2022 season, the team wore specialty jerseys featuring the jug logo that were worn for just two games, June 3rd and 4th. Each of those games finished as walk-off wins for the Growlers. Now those uniforms will see a lot more action moving forward as the logo is here to stay.