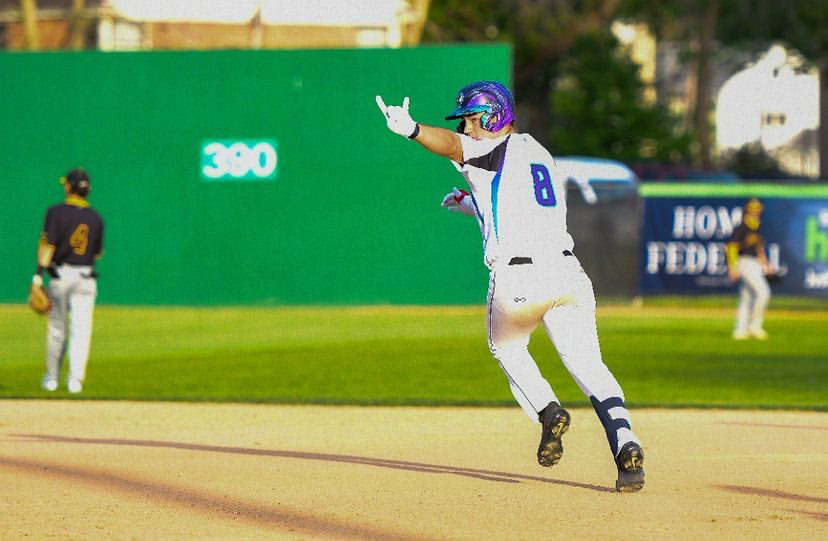 The Honkers got the scoring started in the bottom of the first after Will Asby (Sacramento City College) drove in Alex Ritzer (UNC) with an RBI double. The Stingers quickly responded in the second inning after their first five batters reached against Honkers starter Frank Craska (Lafayette College). Two runs scored on a bases loaded walk to Lincoln Ornellas (American River College) and Kyle Payne (Northwest Nazarene University) RBI single. With the bases loaded and two outs AJ Campbell (Frostburg State) got Craska out of the inning with a diving stop at third preventing three runs from scoring.

In the third the Honkers retook the lead, thanks to the bat of Will Asby again. With two on and two outs Asby drilled a first pitch fastball over the right field fence for a three run homerun, the first Honkers homer of the season, giving Rochester a 4-2 lead.

“I haven’t really played in a month,” Asby said. “This being my first game back I was just trying to see the ball tonight and find some barrels.” On his home run, Asby was thrilled, “I was just excited for our team honestly, coach Urbs [Andrew Urbistondo] told us to hit low line drives because the wind was blowing 25 mph and that’s what exactly what that was.”

The Honkers added another in the fifth on a wild pitch and from there the bullpen took care of the rest. Jace Root (Delta College), David Rodriguez (Delta College), and Thaniel Trumper (Doane) combined for seven scoreless innings. Root picked up the win throwing four scoreless, Rodriguez pitched two scoreless and Trumper picked up his first save of the season after striking out the side in the ninth. Field manager Andrew Urbistondo was pumped about his bullpen postgame.

“They’re dogs, that’s the only word I can say man,” said Urbistondo. “We weren’t expecting to use Root that early in the third inning but he stepped up, we got it to Rodriguez, then Trumper and the rest is history.”

For the second consecutive season the Honkers start 1-0. They’ll look for the two game sweep against Willmar tomorrow. Noah Rooney (Minnesota) gets the start. First pitch is set for 6:35 CT at Mayo Field.