Battle Jack’s offense too much for Rivets 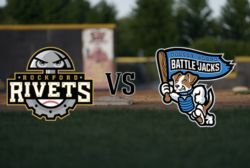 The Rivets offense could not keep up with the red-hot Battle Creek bats on a muggy night at Rivets stadium. The first place Battle Jacks defeated the Rockford Rivets 15 to nine in an offensive showcase on Tuesday.

The Battle Jacks opened the scoring in the second on an RBI double by Jace Matkin, but the Rivets answered quickly. Rockford scored five in the bottom of the second, highlighted by a two run homerun by Ty Crittenberger.

Battle Creek scored two more off starter Ryan Green in the top of the third inning to bring the score to five to three.

In the bottom half of the third, the Rivets bats struck again with five more runs. Ryan Hampe and Colton Klein both doubled in the inning. Crittenberger drove home Klein on a sacrifice fly for his 18th RBI of the season.

The wheels fell off for Rockford in the fourth. Green labored in the heat, and the Battle Creek offense took advantage.

Jace Matkin led off the inning with a home run and the Battle Jacks continued to string together basehits. After Battle Creek batted through the order and four runs had already crossed the plate in the inning, Green was replaced by Zach Kempe.

Kempe inherited a bases loaded, two out jam. Matkin repeated his lead-off at bat and hit a towering grand slam to straight away center to give Battle Creek the lead. Matkin finished 4-6 with seven RBIs in the game.

Nate Ross, pitching in relief for Battle Creek, then shut down the Rivets offense. Ross was charged with two runs in the third but held Rockford scoreless through the seventh. Ross pitched five total innings, giving up just two runs and five hits.

Ryan Green was charged with the loss and Nate Ross earned the win. The teams will play Wednesday in a double header, with the first game beginning at 11 am.