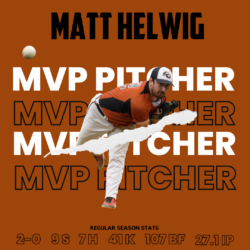 Eau Claire, Wi – Relief pitcher Matt Helwig (Lewis) has been named the 2022 Pitcher of the Year for the Eau Claire Express! This comes after a dominant summer for the righty as he posted 41 strikeouts, a 0.083 opponent batting average, and 0.99 ERA, which was second in the Northwoods League among pitchers with at least 25 innings pitched.

Helwig was a stellar piece of the Lewis bullpen during his junior campaign. He recorded a 2.31 ERA in 23.1 innings with 34 strikeouts, 0.141 OBA, and three saves for the Flyers. Helwig was clutch in Lewis’ conference elimination game, tossing two shutout frames and striking out one.

The Mokena, IL product quickly became the Express closer after earning the trust of manager Dale Varsho. Helwig wouldn’t disappoint in this role, as his nine saves were fourth in the Northwood League and fifth in Express single-season history. This wasn’t the only place he appeared in the record books, as he ranked second in opponent batting average and third in ERA. Helwig was selected to participate in the 2022 NWL All-Star Game and was named to the NWL Postseason All-Star Team.

Helwig will look to build off his success this summer as he heads into his senior season.

The Eau Claire Express is a member of the finest developmental league for elite college baseball players, the Northwoods League. The Northwoods League is the proven leader in the development of elite college baseball players. Now in its’ 29th season, the Northwoods League is the largest organized baseball league in the world with 22 teams, drawing significantly more fans, in a friendly ballpark experience, than any league of its kind. A valuable training ground for coaches, umpires, and front office staff, 300 Northwoods League players have advanced to Major League Baseball, including three-time All-Star and 2016 Roberto Clemente Award winner Curtis Granderson, three-time Cy Young Award winner and World Series Champion Max Scherzer (NYM), two-time World Series Champions Ben Zobrist and Brandon Crawford (SFG) and World Series Champion Chris Sale (BOS). As well as 2019 Rookie of the Year and 2019/2021 Home Run Derby Champion Pete Alonso (NYM) and 2021 All-Star, MLB Gold Glove winner and 2019 Second Team All-MLB shortstop Marcus Semien (TEX). All league games are viewable live via the Northwoods League website. League games are viewable live at watchnwl.com and on ESPN+. For more information, visit www.eauclaireexpress.com or download the new Northwoods League Mobile App on the Apple App Store or on Google Play and set the Express as your favorite team.