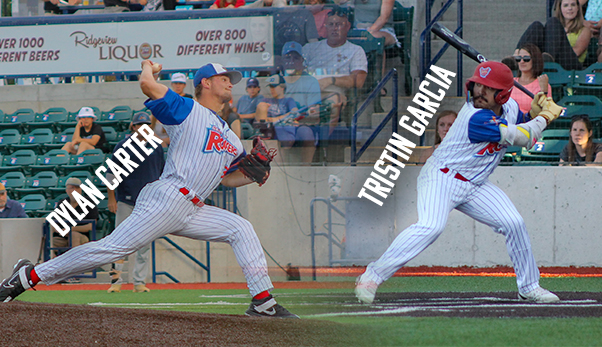 Ashwaubenon, Wis.- Two players from the Green Bay Rockers made the 2022 Northwoods League All-Star Team on Friday, after both had outstanding seasons for the Rockers throughout this past summer.

Garcia and Carter join 30 other players as part of the All-Star squad here in 2022 after they both played for the majority of the 2022 summer including in the Northwoods League All-Star Game this past July.

This past season, the Arkansas Razorback pitched 57.2 innings and struck out 48 batters while walking just 18 and finished with a 2.97 ERA in nine games pitched.

One of his premier starts came against the Lakeshore Chinooks on June 12, in which he pitched a complete game shutout with eight strikeouts and just five hits given up.

Garcia completed his second summer with Green Bay with a .345 batting average, hitting five home runs, and knocking in 46 RBIs. His 79 hits also are good for third in the entire Northwoods League.

The Western Kentucky product delivered a signature moment for the Rockers at home this season as he hit a two-run walk-off home run against the Lakeshore Chinooks earlier in June.

Garcia also competed in the Major League Dreams Showcase as well as the Northwoods League All-Star Game and in the All-Star Game, he went 1-2 with a run scored and a hit.

The Rockers finish out the 2022 season Friday at home against the Chinooks before taking on Lakeshore in a doubleheader on Saturday to close out the regular season.

The Green Bay Rockers are a member of the finest developmental league for elite college baseball players, the Northwoods League. The Northwoods League is the proven leader in the development of elite college baseball players. Now in its’ 29th season, the Northwoods League is the largest organized baseball league in the world with 22 teams, drawing significantly more fans, in a friendly ballpark experience, than any league of its kind. A valuable training ground for coaches, umpires, and front office staff, 300 Northwoods League players have advanced to Major League Baseball, including three-time All-Star and 2016 Roberto Clemente Award winner Curtis Granderson, three-time Cy Young Award winner and World Series Champion Max Scherzer (NYM), two-time World Series Champions Ben Zobrist and Brandon Crawford (SFG) and World Series Champion Chris Sale (BOS). As well as 2019 Rookie of the Year and 2019/2021 Home Run Derby Champion Pete Alonso (NYM) and 2021 All-Star, MLB Gold Glove winner and 2019 Second Team All-MLB shortstop Marcus Semien (TEX). All league games are viewable live via the Northwoods League website. League games are viewable live at watchnwl.com and on ESPN+. For more information, visit www.greenbayrockers.com or download the new Northwoods League Mobile App on the Apple App Store or on Google Play and set the Rockers as your favorite team.