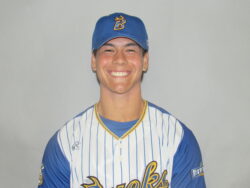 The event, which will be hosted by La Crosse Loggers at Copeland Park on Tuesday, August 2, will consist of a double-header featuring the top players from the NWL.  Walton will play for the Visiting Team in the 4:00 pm game.

Walton, a freshman from the University of Hawaii and originally from La Canada, California, is an outfielder currently hitting .276 with three home runs, 11 RBI, and six stolen bases.  Walton represented Waterloo in the 2022 NWL All-Star Game.

The first game will start at 4:00 p.m. and will match two teams featuring a mix of players from the Great Plains and Great Lakes Divisions. The players on the visiting team in this game will primarily come from Battle Creek, Duluth, Kalamazoo, Traverse City, Waterloo, and Minnesota. The home team will be made up of players mainly from Fond du Lac, Eau Claire, Green Bay, Rockford, and St. Cloud. Marcus Pointer of the Duluth Huskies will skipper the visiting team while Dale Varsho of the Eau Claire Express will manage the home team.

The second game will again be played by two teams of Great Lakes and Great Plains players. The visiting team for this game will be made up of players mostly from Willmar, Lakeshore, Kokomo, Kenosha, and Bismarck. The home team will have players from La Crosse, Madison, Mankato, Rochester, Wausau, and Wisconsin Rapids. Freddy Smith of the Willmar Stingers will be the Field Manager for the visiting team. Mallards Field Manager and former MLB catcher Donnie Scott will be in the dugout for the home team.

Tickets for the event can still be purchased and are available at lacrosseloggers.com

The Bucks are currently on an eight-game road trip but will return home to begin a two-game homestand versus the Mankato MoonDogs on Friday, July 30 at 6:35 pm.  Tickets are available for all games at www.waterloobucks.com or by calling the Bucks Ticket Line at (319) 232-5633.  Cost Cutters Field at Riverfront Stadium, home of the Bucks, welcomed a new state of the art video board in 2016 thanks to a matching grant from the Black Hawk County Gaming Association.  Team ownership has invested nearly $400,000 in stadium improvements since the end of the 2014 season including group outing areas, painted bleachers, public Wi-Fi, sound system, kids zone inflatables, wiffle ball field, and concessions equipment.  Fans are encouraged to stay in touch with the Bucks by utilizing their website at www.waterloobucks.com or utilizing the Northwoods League Mobile App.