Waterloo, Iowa – The Waterloo Bucks have announced they will host a football watch party on their 474-square-foot LED video board next week.  On Saturday, September 10, the annual Cy-Hawk game between the Iowa Hawkeyes and the Iowa State Cyclones kicks off at 3:00 pm.  Gates at Cost Cutters Field at Riverfront Stadium will open at 2:30 pm. 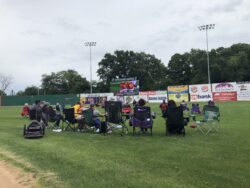 There will be free admission and fans are encouraged to bring a blanket or lawn chair and sit on the field to watch the games.  No outside food or drink will be allowed, as the concessions stands will be open.

The Bucks concluded their 2022 Northwoods League season.  2023 season tickets are currently available by calling the Bucks Ticket Line at (319) 232-5633.  Cost Cutters Field at Riverfront Stadium, home of the Bucks, welcomed a new state of the art video board in 2016 thanks to a matching grant from the Black Hawk County Gaming Association.  Team ownership has invested nearly $400,000 in stadium improvements since the end of the 2014 season including group outing areas, painted bleachers, public Wi-Fi, sound system, kids zone inflatables, wiffle ball field, and concessions equipment.  Fans are encouraged to stay in touch with the Bucks by utilizing their website at www.waterloobucks.com or utilizing the Northwoods League Mobile App.

The Waterloo Bucks are a member of the finest developmental league for elite college baseball players, the Northwoods League. The Northwoods League is the proven leader in the development of elite college baseball players. Now in its’ 29th season, the Northwoods League is the largest organized baseball league in the world with 22 teams, drawing significantly more fans, in a friendly ballpark experience, than any league of its kind. A valuable training ground for coaches, umpires, and front office staff, 300 Northwoods League players have advanced to Major League Baseball, including three-time All-Star and 2016 Roberto Clemente Award winner Curtis Granderson, three-time Cy Young Award winner and World Series Champion Max Scherzer (NYM), two-time World Series Champions Ben Zobrist and Brandon Crawford (SFG) and World Series Champion Chris Sale (BOS). As well as 2019 Rookie of the Year and 2019/2021 Home Run Derby Champion Pete Alonso (NYM) and 2021 All-Star, MLB Gold Glove winner and 2019 Second Team All-MLB shortstop Marcus Semien (TEX). All league games are viewable live via the Northwoods League website. League games are viewable live at watchnwl.com and on ESPN+. For more information, visit www.waterloobucks.com or download the new Northwoods League Mobile App on the Apple App Store or on Google Play and set the Bucks as your favorite team.