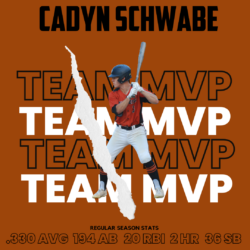 In his sophomore season at North Dakota State, Schwabe saw great success on the diamond. Starting 42 games for the Bison, the outfielder recorded a .298 batting average with seven extra-base hits and 18 stolen bases which ranked third in the Summit League. He was second on the team with 15 multi-hit games and finished the season with a 16-game on-base streak.

Schwabe was an on-base machine for Eau Claire as soon as he arrived on the team this summer, putting him on the single-season leaderboards in multiple categories. He placed sixth in batting average, fourth in OBP, tied for fourth in walks, third in runs scored, and second in stolen bases. He also led the 2022 team in all of these departments except for walks.

Schwabe will look to continue his elite production during his junior season at North Dakota State.

The Eau Claire Express is a member of the finest developmental league for elite college baseball players, the Northwoods League. The Northwoods League is the proven leader in the development of elite college baseball players. Now in its’ 29th season, the Northwoods League is the largest organized baseball league in the world with 22 teams, drawing significantly more fans, in a friendly ballpark experience, than any league of its kind. A valuable training ground for coaches, umpires, and front office staff, 300 Northwoods League players have advanced to Major League Baseball, including three-time All-Star and 2016 Roberto Clemente Award winner Curtis Granderson, three-time Cy Young Award winner and World Series Champion Max Scherzer (NYM), two-time World Series Champions Ben Zobrist and Brandon Crawford (SFG) and World Series Champion Chris Sale (BOS). As well as 2019 Rookie of the Year and 2019/2021 Home Run Derby Champion Pete Alonso (NYM) and 2021 All-Star, MLB Gold Glove winner and 2019 Second Team All-MLB shortstop Marcus Semien (TEX). All league games are viewable live via the Northwoods League website. League games are viewable live at watchnwl.com and on ESPN+. For more information, visit www.eauclaireexpress.com or download the new Northwoods League Mobile App on the Apple App Store or on Google Play and set the Express as your favorite team.