EAU CLAIRE, Wis. – Perfect Game, the premier baseball talent evaluator, has released its annual list of NWL prospects and two familiar faces are featured. 3B/RHP Charlie Szykowny (Illinois-Chicago) and SS Trevor Haskins (Stanford) were named to the 40-player list with Szykowny coming in at no. 25 and Haskins at no. 30.

Szykowny was the top power threat for the Express during the 2022 campaign, leading the team in home runs (7) and slugging percentage (.448). He showed off his versatility throughout the season, making appearances as a third baseman, shortstop, and relief pitcher. Though Szykowny has predominantly played infield, he showed potential on the mound with a fastball reaching 95 MPH.

In his senior season at UW-Stout, Szykowny had a historic season as he broke the school record for home runs (18) and RBI (55). The Palos Heights, Ill. product produced a .398 batting average and 1.344 OPS en route to being named a first-team All-American by D3baseball.com and ABCA/Rawlings. He transferred to the University of Illinois-Chicago this summer, where he will spend his fifth and final season of collegiate baseball. 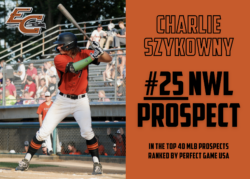 Haskins had a solid summer with Eau Claire in 2022 as he showed flashes of why he was a top 50 prospect out of California in the 2021 recruiting class. The shortstop finished with 22 RBI, six extra-base hits, and a .415 on-base percentage in 39 games. Haskins was impressive with his glove as well, making numerous highlight plays throughout the summer. 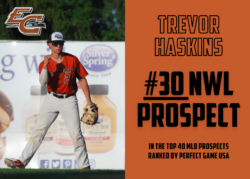 Haskins was limited to a pinch-hitting role during his freshman year at Stanford, but he took advantage of the opportunities given to him. The San Jose native had five hits in 14 at-bats, including one home run, one double, and six RBI. Haskins will look to build on his success as he rolls into his sophomore year with the Cardinals.

The duo proved themselves as two of the top players in the Northwoods League this past summer and are poised to continue their success in the upcoming collegiate season.

The Eau Claire Express is a member of the finest developmental league for elite college baseball players, the Northwoods League. The Northwoods League is the proven leader in the development of elite college baseball players. Now in its’ 30th season, the Northwoods League is the largest organized baseball league in the world with 22 teams, drawing significantly more fans, in a friendly ballpark experience, than any league of its kind. A valuable training ground for coaches, umpires, and front office staff, 300 Northwoods League players have advanced to Major League Baseball, including three-time All-Star and 2016 Roberto Clemente Award winner Curtis Granderson, three-time Cy Young Award winner and World Series Champion Max Scherzer (NYM), two-time World Series Champions Ben Zobrist and Brandon Crawford (SFG) and World Series Champion Chris Sale (BOS). As well as 2019 Rookie of the Year and 2019/2021 Home Run Derby Champion Pete Alonso (NYM) and 2021 All-Star, MLB Gold Glove winner and 2019 Second Team All-MLB shortstop Marcus Semien (TEX). All league games are viewable live via the Northwoods League website. League games are viewable live at watchnwl.com and on ESPN+. For more information, visit www.eauclaireexpress.com or download the new Northwoods League Mobile App on the Apple App Store or on Google Play and set the Express as your favorite team.