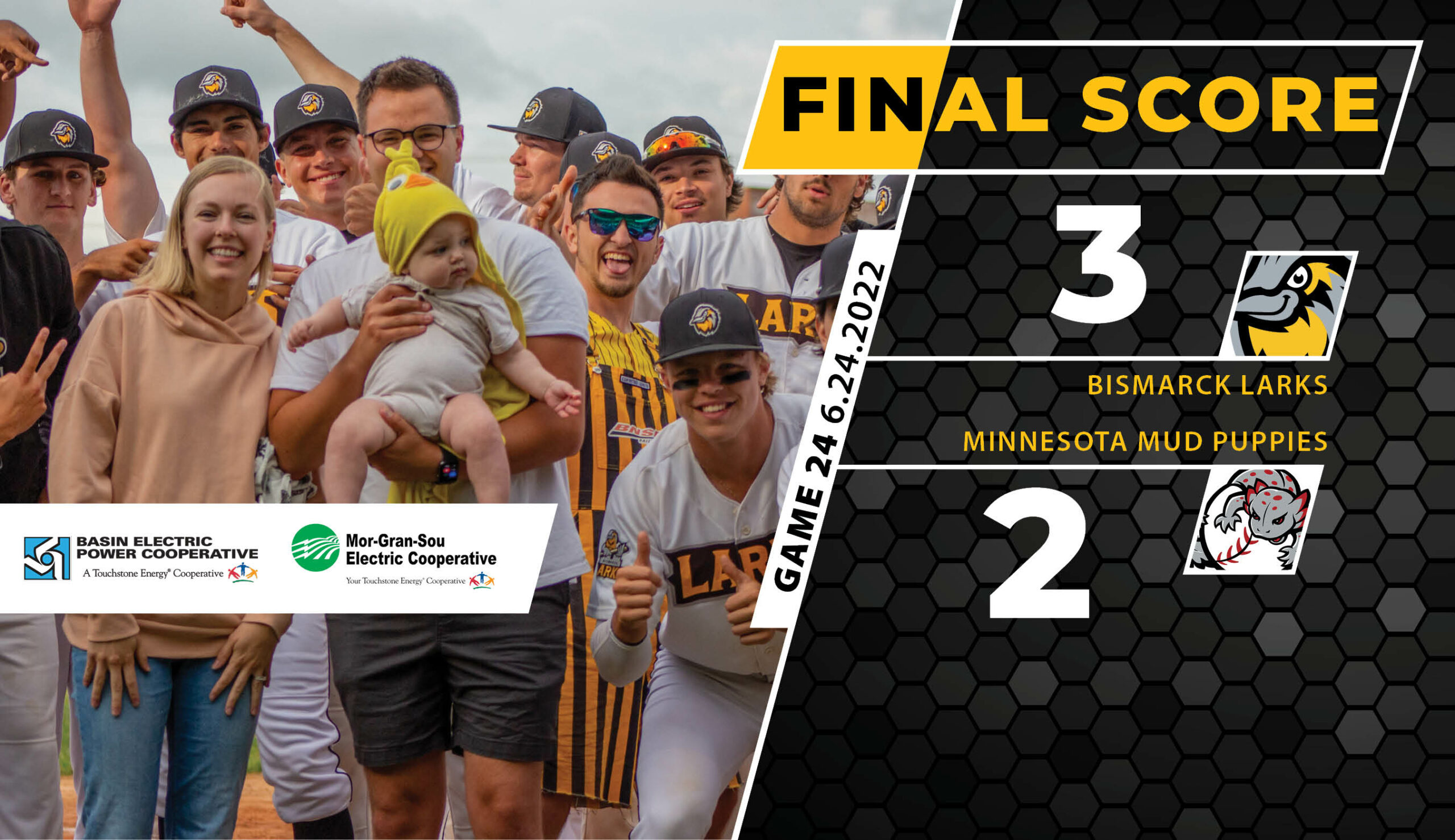 The Larks saw three pitchers on the mound today, who all had beautiful performances. Garrett Yawn (Long Island – Brooklyn) in his second start on the mound went six innings, allowing only one earned run, three hits, and collecting 10 strikeouts.

Edwin Colon (Northwestern Oklahoma State) was first out of the bullpen, pitching two perfect innings. He allowed no earned runs, one hit and struck out three Mud Puppies. Finally, Larks closer Nate Boyle (Drury University) got the save, striking out one and allowing no earned runs. Boyle also delivered the Metro Area Ambulance Fastest Pitch of the Game at 90 mph.

For the Mud Puppies, Jakob Mrosko (St. Thomas) got the start and went five innings, allowing one earned run, three hits and struck out five. The Larks tagged two earned runs to relief pitcher Dorsey Chatham (Xavier) who went an inning and two thirds, allowing two hits, two walks and two runs. The Mud Puppies saw good performances from Miles Hannigan (Xavier) and Ryan Hulke (Bismarck State) who combined for an inning and a third of no hit and no run baseball.

Hits were at a premium tonight for the Larks, combining for a total of five hits. The Larks also got on base four times on walks and three times on hits by pitches. Dylan Perry (Kaskaskia College) had an impressive day at the plate, going 2-for-3 with a double, a scored run and an RBI. Kai Hori (San Mateo) also delivered the go-ahead RBI with a groundout in the bottom of the sixth.

Luke Glascoe (UC – San Diego) in his second game of the season, delivered the Fetzer Electric Play of the Game, starting the relay to throw out a runner at second in the top of the eighth inning. The relay went from Glascoe in center to AJ Barraza (CSU San Bernandino) at shortstop to the second basemen Kai Hori.

The Larks kept the Mud Puppies at bay at plate. Minnesota combined for six hits and only reached base safely eight times. Ben Vujovich (St. Thomas) delivered an RBI sacrifice fly in the third to tie the game at one. All six hits were delivered by six different players for the Mud Puppies. Only one player got on base more than once for Minnesota, while six runners were left on base.

Bismarck hits the road for two, 2-game series against the Duluth Huskies and the Rochester Honkers, before coming home for six games in a row. You can catch all four road games at mixlr.com/larksbaseball.

If you had a ticket to Friday’s game, stay tuned for more information on when fireworks will be added to your pack schedule.