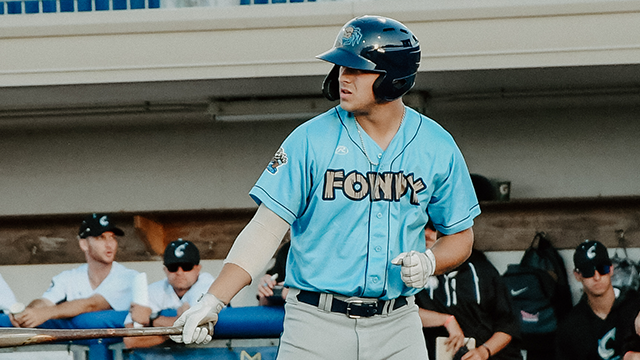 As the Minnesota Mud Puppies return back to the field after a few days off they receive their third win of the season against the Bismarck Larks. The Kenosha Kingfish have been on a roll working their way back into the win column and tonight they reached a winning record 12-11 on the season defeating the Battle Creek Battle Jacks 6-1. Tomorrow the teams will face off again to complete the series.

The Kenosha Kingfish are now in the win column as they defeat the Battle Creek Battle Jacks 6-1. The Kingfish scored three runs in the first inning with an RBI double by Drake Westcott (University of Louisville) and an RBI single by Gage Williams (Wichita State University). Westcott had two hits and two walks, scoring twice as he reached base. Williams also had two hits and led his team with three RBI. The Kingfish scored another three runs in the third innings with a lead off home run by Jacob Tobias (Arizona State University).

The Rockford Rivets rallied back to take down the Kokomo Jackrabbits 7-3. Down by three heading into the third Ty Crittenberger (Western Kentucky) drove in the first run of the game with a single. Matthew Mebane (South Georgia State College) followed it up with a two run home run to tie the game. Mebane had two hits, a walk and two RBI with a stolen base. Dylan Robertson (Iowa Western Community College) also had two hits, a walk, two RBI and a stolen base. Kyle Seebach (Northern Illinois University) started the game throwing seven innings with five strikeouts.

The Traverse City Pit Spitters win their second game in a row against the Kalamazoo Growlers 15-8. The Pit Spitters had many players with multi hit games including Christian Beal (University of Richmond) and Alec Atkinson (Yale University) who each had two hits with a double. Hunter Tabb (Southern University and A&M College) led the offense with three hits, a double and three RBI. Mason Patel (Georgia State University) had the win on the mound throwing five innings with seven strikeouts. The Pit Spitters combined for 15 hits and 10 strikeouts from the pitching staff.

The Wisconsin Rapids Rafters win their 19th game of the season against the Fond du Lac Dock Spiders 5-4. After the Spiders scored first the Rafters struck back with a two run home run by Jacob Igawa (University of Hawaii) to take the lead. The Rafters scored two more to tie the game in the third inning with a double by Brendan Bobo (California State University, Fullerton). With a tied game, Ben Ross (Notre Dame College) drove an RBI single to take the lead in the bottom of eighth.

The Lakeshore Chinooks win their third game in a row against the Green Bay Rockers 9-1 in seven innings. The Chinooks took the lead scoring three runs in the first inning. Scoring almost every innings the Chinooks combined for 14 hits and zero errors on the field. Josh Johnson (Kent State University) and Bryce Stober (Lenoir-Rhyne University) both had three singles each with two RBI by Johnson. Peyton Sanderson (Paris Junior College) had the only home run of the game in the second inning.

The Rochester Honkers take the first game of the series against the Waterloo Bucks 6-2. The Honkers started the game off hot, scoring five runs in the first inning. With bases loaded Will Asby (Sacramento City College) drove in two runs with a single to right field. Kimo Fukofuka (San Jose State University) followed it up with a three run home run. Fukofuka had two hits on the night. Frank Craska (Lafayette College) had the win on the mound throwing 7.1 innings.

As the Minnesota Mud Puppies take the field again they take the win against the Bismarck Larks 6-4. Noah Dehne (North Dakota State University) led his team with two hits including a home run in the ninth inning to tack on the final run of the game. Dehne had three RBI on the night. Cam Hunter (Highland Community College) had one hit and one walk scoring each time he reached base. Chad Fox (University of Minnesota-Duluth) started the game throwing 4.1 innings with five strikeouts.

The Madison Mallards win their second game in a row to take the first game against the Wausau Woodchucks 5-1. Madison had seven hits with Josh Caron (University of Nebraska) driving two singles to the outfield with two RBI. Marcus Brodil (University of South Florida) drove a triple in the bottom of the third to score the third run of the game. Ryan O’Hara (University of Illinois)  had the win on the mound throwing five innings with six strikeouts.