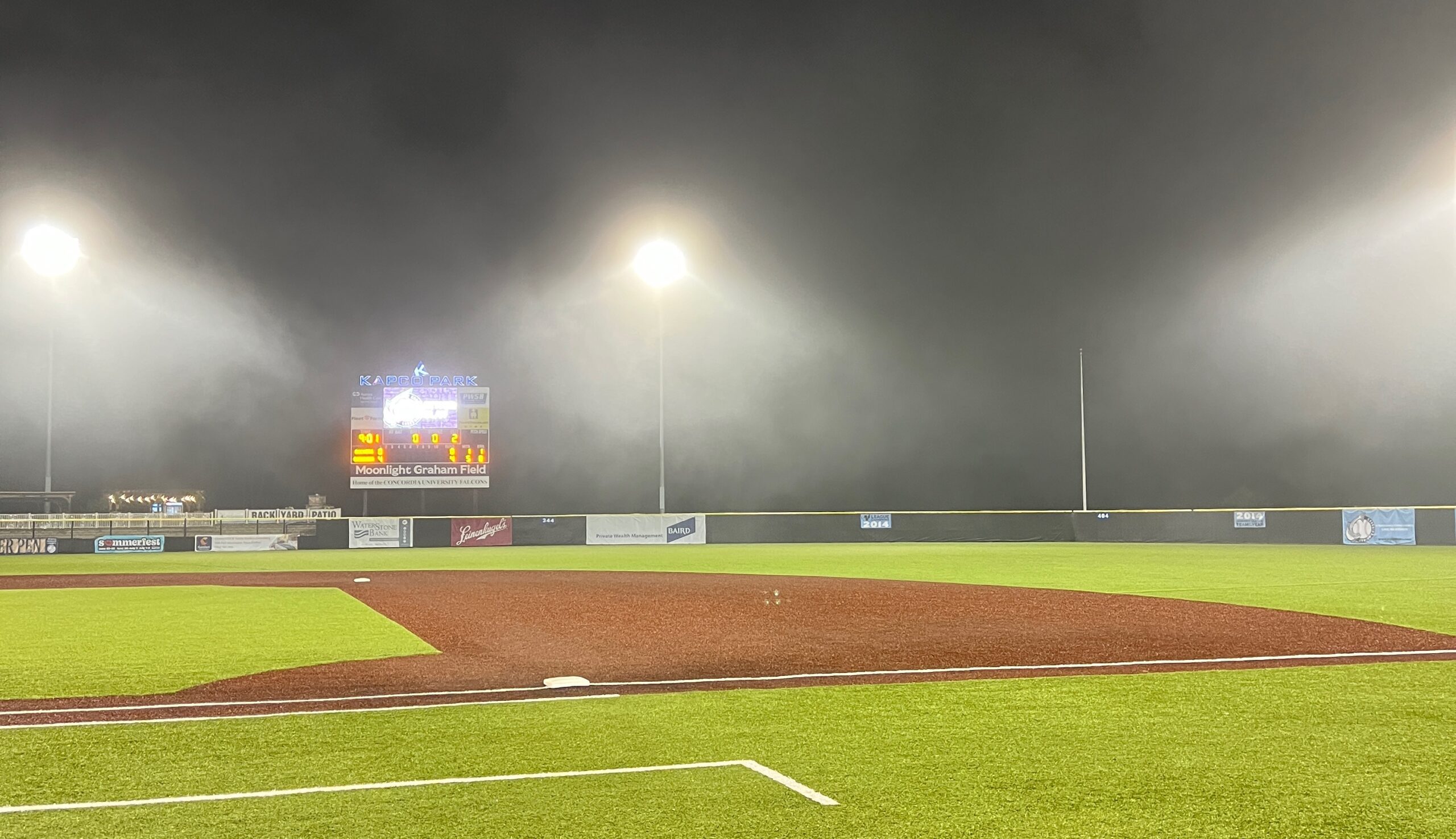 The Wisconsin Rapids Rafters continue the second half of the season the same way they ended the first. The Rafters currently lead the league with twelve wins along with a 7-3 record in their past ten games. The Willmar Stingers are making a comeback in the second half of the season with a 10-3 record leading the league with a .769 win percentage. The Eau Claire Express won their 11th game with an exciting walk off win to start their series.

The Duluth Huskies rallied to walk off the game against the St.Cloud Rox 2-1. Jared Mettam (Saint Mary’s College) started off the bottom of the ninth with a single and later advanced to third. With one out JD Rogers (Vanderbilt University) was able to drive the ball to the outfield to score Mettam on a sac fly. Jonathan Vastine (Vanderbilt University) led the team with two hits and one RBI. Jake Combs (Southern Illinois University) was the starting pitcher throwing six innings with four strikeouts allowing only one run to score. The Huskies combined a total of eight hits to earn their four wins in a row.

The Kokomo Jackrabbits defeated the Kenosha Kingfish 5-2 in a seven inning game. Alejandro Holguin (University of South Carolina – Upstate) and Matt Aribal (University of Hawaii) both had three hits each with a double by Holguin and a RBI by Aribal. Luke Satori drove in two runs with one hit and one stolen base. Maxwell Montplasir (Point Loma Nazarene University) earned the win on the mound throwing six complete innings with two strikeouts allowing two runs to score. The Jackrabbits had eight hits with zero errors on the field to take the first game of the series.

The La Crosse Loggers won their second game in a row as they took down the Minnesota Mud Puppies for game one of the series. The Loggers scored four runs in the sixth inning to advance their lead with two RBI doubles by Josh Stevenson (Louisiana State University) and Ace Whitehead (University of Texas at Austin) along with an RBI single by Connor Walsh (Rice University). Walsh had two hits with a double and an RBI. Ronald Sweeny III (University of Minnesota) had the only home run of the night with two RBI. Drew Christo (University of Nebraska) earned the win throwing five innings with seven strikeouts.

The Rockford Rivets won their eight game against the Kalamazoo Growlers 14-4. The Rivets had an explosive fifth inning scoring eight runs with a home run by Ty Crittenberger (Western Kentucky) and an RBI single by Dylan Robertson (Iowa Western Community College). Crittenberger had three hits with three RBI and Robertson had four hits with three RBI. Matthew Mebane (South Georgia State College) also had a home run on the night going four for six at the plate. Ty Rybarczyk (University of Illinois) threw six innings with nine strikeouts to earn the win on the mound. The Rivets generated 17 hits and three doubles on the night.

The Eau Claire Express struck first to take the first game of the series against the Rochester Honkers 4-3. With a tied game going into the bottom of the ninth Benjamin Rosengard (Rice University) drove a single to center field to advance a runner to third. Trevor Haskins (Stanford University) followed it up with another single to walk off the game. Haskins had two hits with two walks on the night. Max Coupe (Skyline College) helped to lead the team with two hits, a home run and one RBI. Cory Ronan (University of Hawaii) was the starting pitcher throwing five innings with five strikeouts.

The Battle Creek Battle Jacks won their second game in a row as they took down the Traverse City Pit Spitters 9-7. Patrick Mills (Indiana University Kokomo) and Isaiah Gibbs (William Woods University) both had two hits with a double each. Aaron Dolney (Eastern Michigan University) had two hits with a triple and two RBI. Evan Borst (Iowa Central Community College) scored the first run of the game with a home run over the left field fence. Justin Graves (Vanguard University) threw the first 2.1 innings with four strikeouts allowing one run to score. The Battle Jacks had a solid game with 13 hits and no errors on the field.

The Wisconsin Rapids Rafters won their 12th game of the second half of the season defeating the Madison Mallards 7-4. Jacob Igawa (University of Hawaii) reached base twice with two doubles and a stolen base scoring each time. Chase Call (University of California, Irvine) came into the game as a pinch hitter in the bottom of the eighth inning and blasted a home run scoring three runs. Colin Tuft (University of Virginia) reached base four times with two hits and two walks. The Rafters had nine hits with four walks to take game one of the series.

The Mankato MoonDogs won their third game in a row as they defeated the Bismarck Larks 5-3. The MoonDogs scored three runs in the fourth innings with an RBI single by Ariel Armas (University of San Diego) and Kai Roberts (University of Utah). Roberts had two hits with one RBI. Charles McAdoo (San Jose State University) led the team with three hits, two RBI and one stolen base. Miles Garrett (Vanderbilt University) earned the win on the mound throwing two innings with three strikeouts giving up no hits. The pitching staff had seven strikeouts to hold the Larks.