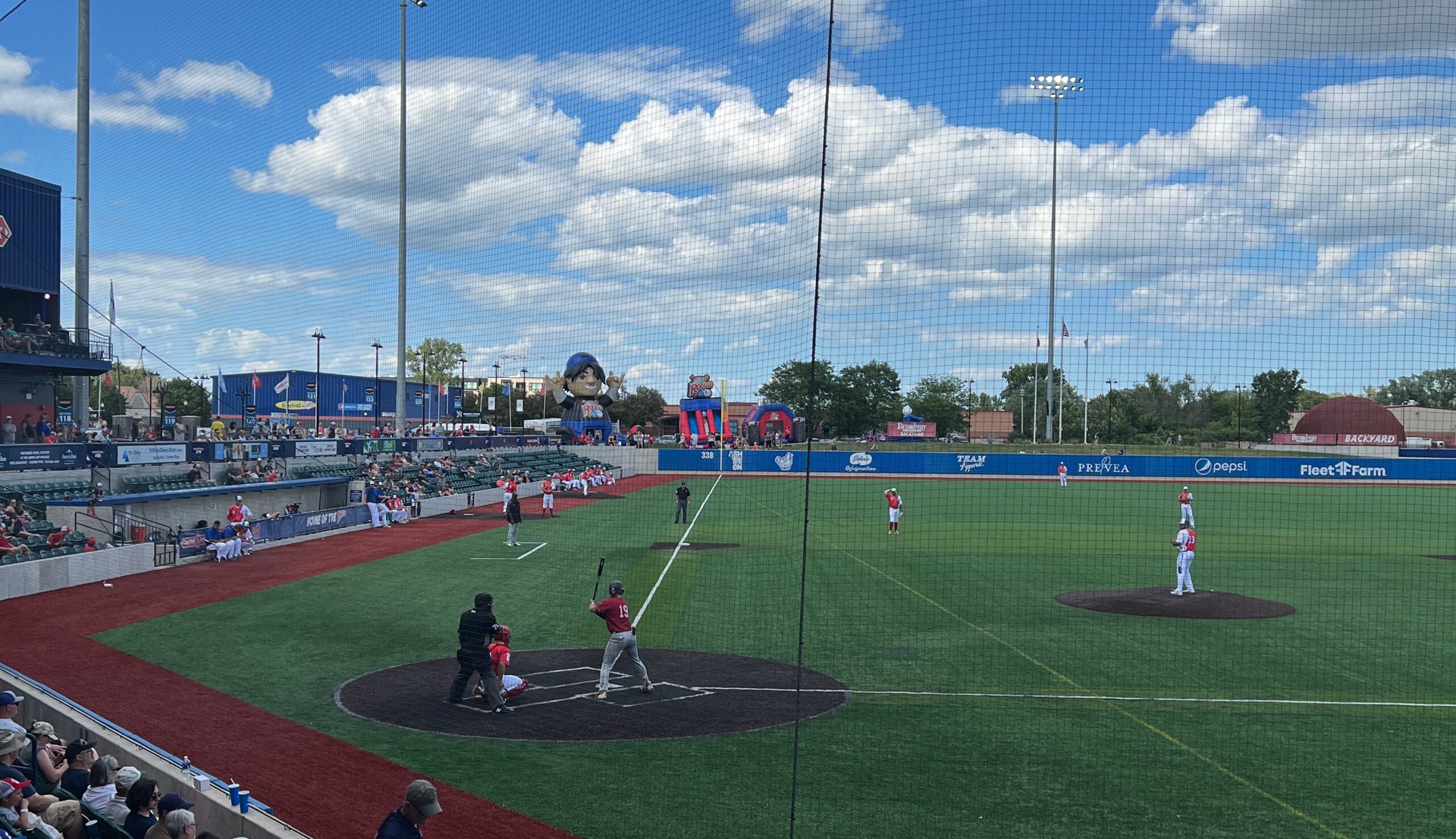 For one of the highest scoring games of the season so far, the Willmar Stingers defeated the Larks 27-2 for their 11th win in a row. The Fond du Lac Dock Spiders also had an explosive offense to win their second game in a row 21-2. Ten teams continued their success today to sweep their series.

The Rockford Rivets swept the series as they took down the Kalamazoo Growlers 5-1. The Rivets rallied back, scoring four runs in the ninth inning to take the lead. Brandon Bannon (University of Illinois at Springfield) had the first hit in the ninth inning with a single to the pitcher. Matthew Mebane (South Georgia State College)  and Connor Allen (Southern Arkansas University) both followed it up with two RBI singles. Bannon had four hits on the night. Allen had one hit, a walk with two RBI and Mebane had one hit with a stolen base, scoring twice as he reached first. Jake Hartman Jr. (Carthage College) closed the game throwing the last inning with two strikeouts giving up no hits.

The Battle Creek Battle Jacks won their second game in a row against the Madison Mallards 14-10. The Battle Jacks scored in almost every inning with Isaiah Gibbs (William Woods University) leading the offense with four hits, a stolen base and two RBI. Billy Hancock (Mount Marty College) reached base three times with two doubles and three RBI. Evan Borst (Iowa Central Community College) and Aaron Dolney (Eastern Michigan University) both had three hits, scoring twice as they reached base with two RBI by Borst. Caleb Lanoux (Middle Georgia State University) earned the win on the mound throwing 5.1 innings with two strikeouts allowing only one run to score.

The Wisconsin Rapids Rafters swept the Green Bay Rockers with a 11-3 victory. The Rafters struck first, scoring five runs in the first inning with a home run by Brendan Bobo (California State University, Fullerton) and an RBI single by Cael Chatham (High Point University). Bobo had three hits with two home runs and five RBI. Chatham had three hits with a triple and three RBI. Andrew Semo (University of San Diego) reached base three times with two doubles and a hit by pitch scoring once. Malakai Vetock (Creighton University) earned the win on the mound throwing three scoreless innings with three strikeouts giving up one hit.

With an explosive offensive effort the Fond du Lac Dock Spiders defeated the Wausau Woodchucks 21-2. Kemp Alderman (University of Mississippi) earned Northwoods League Pitcher of the Night with four hits including two home runs and six RBI. Nick Mitchell (Western Illinois University) had three hits with a double, two triples and three RBI. Branden Comia (University of Illinois) had three hits with a double and four RBI scoring each time he reached base. David Dean (NorthEastern Oklahoma A&M) earned the win on the mound, throwing two innings with three strikeouts giving up only one hit. The Spiders generated 22 hits with zero errors on the field to take the win.

The Lakeshore Chinooks continued their success to sweep the Traverse Pit Spitters 12-11. The Chinooks scored five runs in the first inning with an RBI triple by Matthew Deprey (Xavier University), RBI double by Nathan Aide (Eastern Illinois University) and RBI single by Joey Spence (Notre Dame). Aide and Spence both had two hits on the night. Bryce Stober (Lenoir-Rhyne University) reached base once with a walk, two RBI and a stolen base. Arthur Liebau (Lindenwood University) earned the win throwing 2.2 innings allowing zero runs to score. Marc Lidd (Creighton University)  closed the game throwing the last three innings with three strikeouts allowing one run to score.

The Mankato MoonDogs won their fourth game in a row as they took down the Waterloo Bucks 11-6. Kai Roberts (University of Utah) led the offense with three hits including a double, home run and a stolen base. Brendan Hord (University of Evansville) reached base four times with three hits, a walk and one RBI. Angelo Peraza (University of San Diego) contributed to the offense with two singles, three RBI and a stolen base. T.J Martin (College of St. Scholastica) started the game throwing five innings with two strikeouts. The MoonDogs generated 11 hits with 13 walks to sweep their series.

The Duluth Huskies rallied back to take the series against the Minnesota Mud Puppies 5-4. Drew Conn (Grand View University) started the game throwing the 4.1 scoreless innings with four strikeouts. Eddie Satisky (University Nebraska Omaha) drove in the first run of the game with a single to third base. JD Rogers (Vanderbilt University) led the team with two hits including a triple, one RBI and two stolen bases. Devin Hurdle (University Nebraska Omaha) also had two hits with two stolen bases scoring twice. Kristian Campbell (Georgia Tech) reached base three times with two singles, a walk and a stolen base.

The Kenosha Kingfish won their second game in a row as they defeated the Kokomo Jackrabbits 7-3. The Kingfish scored four runs in the bottom of the fifth inning with a double by Zack Carinci (University of Missouri) scoring two runs and an RBI single by Connor Hincks (Notre Dame). Hincks had two hits on the night, scoring once as he reached base. Zac Rice (University of Tennessee at Martin) reached base four times with a hit, three walks and two stolen bases. The Kingfish had eight hits with zero errors on the field to take the series.

The Eau Claire Express bounced back to split the series against the Rochester Honkers 7-5. Peter Brookshaw (North Dakota State University) led the offense with three hits including a double and a home run in the top of the ninth inning to score the final run of the game. Cadyn Schwabe (North Dakota State University) had two singles with a stolen base scoring each time he reached base. Charlie Szykowny (University of Wisconsin – Stout) also had two hits with an RBI and a walk. Adam Stanton (Iowa Western Community College) was the starting pitcher throwing five innings with five strikeouts. Matt Helwig (Lewis University) closed the game throwing the last 1.1 innings with two strikeouts giving up no hits.

With one of the highest scoring games of the year, the Willmar Stingers defeated the Bismarck Larks 27-2. The Stingers scored seven runs in the bottom of the fifth inning with two RBI doubles by Nick Terrell (Southern Illinois University, Edwardsville) and Will Safford (Louisiana Tech University). Safford led the team with four hits including two doubles, a home run and three RBI. Terrell had two hits with a double and two RBI. Will Hodo (University of Alabama) and Josh Fitzgerald (University of Minnesota) each had three hits on the night with a home run and four RBI. Jack Habeck (St. Cloud State University) earned the win on the mound, throwing the first six innings with three strikeouts.

The St.Cloud Rox earned their fourth win in a row as they took down the La Crosse Loggers 5-1. Ethan Mann (Dallas Baptist) and Garrett Pennington (Wichita State University) both had a home run for their only hit of the night. Brice Matthews (University of Nebraska) contributed to the offense with a double and two RBI. Hunter Day (Tarleton State University) threw the first six innings with six strikeouts allowing only one run to score, earning the win on the mound. The Rox had six hits with two doubles and two home runs to sweep the Loggers.