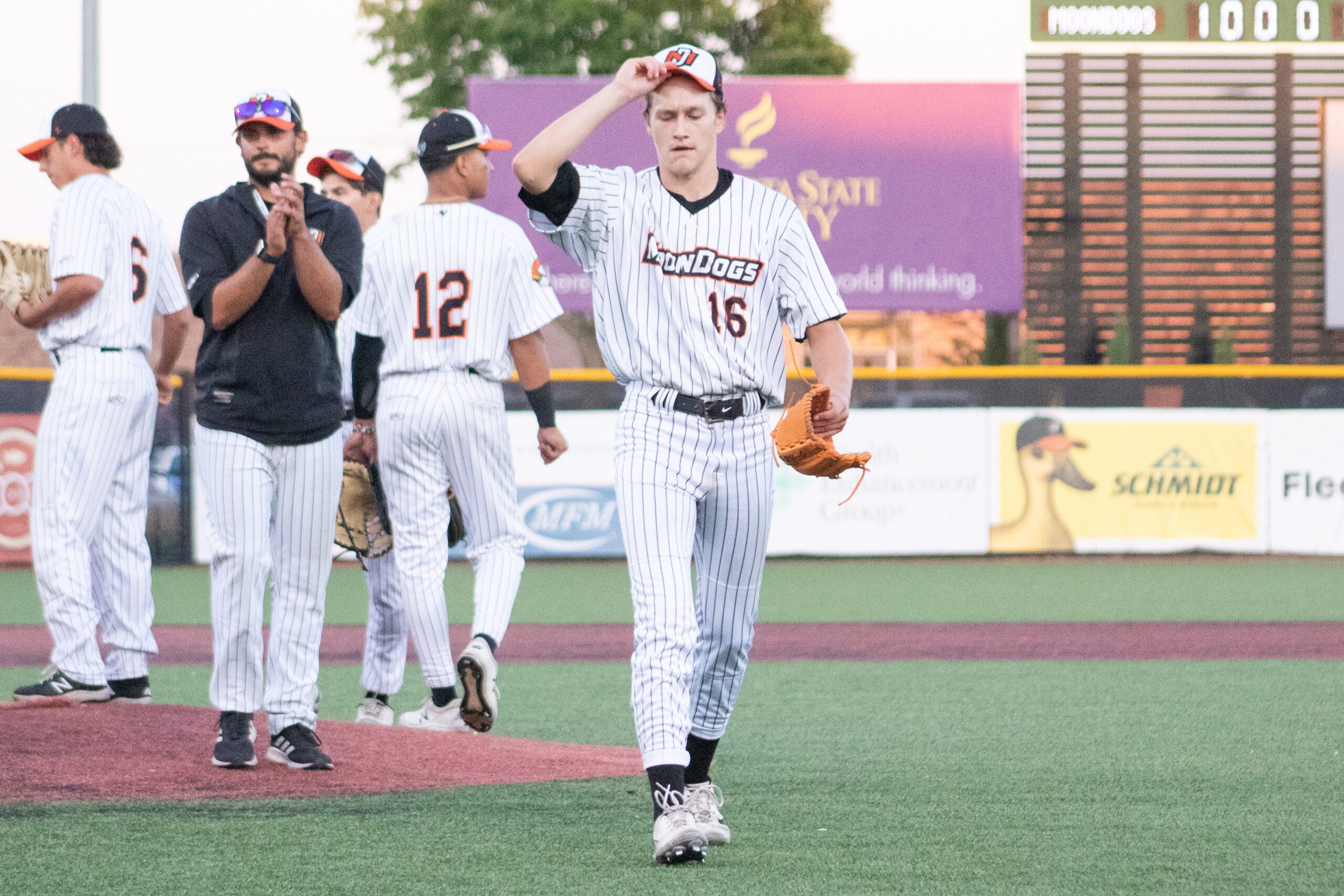 The Wisconsin Rapids Rafters and Lakeshore Chinooks both won their first game of their series with an 11 inning victory. The Traverse City Pit Spitters bounced back from last night’s loss to earn their 18th victory in the second half of the season in a ten inning game. The Willmar Stingers continued their success to earn their 12th win in a row which is the longest win streak of the season so far.

The Rockford Rivets took down the Kalamazoo Growlers 9-1 for the third time in a row. The Rivets struck first, scoring three runs in the first inning. Matthew Mebane (South Georgia State College) led the offense with three hits including a triple, home run and two RBI scoring each time he reached base. Drew Baker (Wright State University), Will Prater (Western Carolina University) and Bryson Parks (Western Carolina University) each had two hits with a double and four RBI total. Jack Moore (Emory University) threw 2.2 innings with four strikeouts giving up one hit allowing zero runs to score. The Rivets generated 12 hits on the night to take the win.

The Fond du Lac Dock Spiders continued their success taking the Battle Creek Battle Jacks 12-11. The Spiders scored 10 runs in the bottom of the ninth inning to walk off the game. Bennett Thomas (University of Oregon) drove in the final run of the game with a double to right field. Thompson led the team with three hits and three RBI. Nick Mitchell (Western Illinois University) had the only home run for his going two for four with an RBI and a walk. Jacob Kampf (Heartland Community College) started the game throwing 3.1 innings with four strikeouts. Gage Smith (Milwaukee Area Tech) earned the win on the mound throwing .2 innings with a strikeout.

The Traverse City Pit Spitters defeated the Green Bay Rockers 3-1 in a ten inning game. Alec Atkinson (Yale University) drove in the first run in the 10th inning with a double to center field. Brennen Dorighi (University of Iowa) hit a sac fly to score the final run. Atikinson and Dorighi both had one hit with a double. Marshall Toole (Wofford College) had the only multi hit game with two singles, a walk and two stolen bases. Anthony Ramirez (California State University, Stanislaus) earned the win on the mound throwing the last 2.1 innings with six strikeouts giving up no hits.

The Mankato MoonDogs defeated the St.Cloud Rox 5-1. Kai Roberts (University of Utah) and Charles McAdoo (San Jose State University) both led their team with two hits including a double and one RBI. Mike Gottschalk (Minnesota State University, Mankato) reached base three times with a hit, two walks scoring once as he reached base. John Lundgren (University of Illinois) started the game throwing 5.1 innings with five strikeouts earning the win on the mound. Jakob Meyer (University of Evansville) threw the last inning with two strikeouts giving up no hits. The MoonDogs had seven hits with zero errors on the field with the pitching staff throwing nine strikeouts.

The Wisconsin Rapids Rafters rallied back to take down the Kokomo Jackrabbits 10-9. The Rafters played a thrilling 11 inning game with Aidan Brewer scoring on a wild pitch to end the game. Mckinley Erves (LaGrange College) and Nate Nankil (California State University, Fullerton) had three hits with a double and two RBI to lead their team. Chase Call (University of California, Irvine) had three singles driving in two runs for the Rafters. Cael Chatham (High Point University) had a great night throwing a scoreless two innings with five strikeouts giving up no hits. The pitching staff for the Rafters threw 14 strikeouts with 13 hits from the offense.

The Lakeshore Chinooks won their third game in a row as they defeated the Madison Mallards 4-2 in an 11 inning game. Andy Nelson (University of Iowa) drove a home run over the left field fence to put the Chinook ahead. Nelson had two home runs with a walk and three RBI. Zack Storbakken (University of Hawaii) reached base four times with three singles and a walk. Matthias Haas (Cal Poly) had two hits on the night with a double and one RBI. Xander Rojahn (Xavier University) was the starting pitcher throwing five innings with five strikeouts allowing only one run to score.

The Eau Claire Express won their 15th game of the season as they took down the Waterloo Bucks 7-5. Ethan Louthan (Oklahoma College-Tonkawa)  earned the win on the mound throwing six innings with seven strikeouts allowing one run to score. Max Coupe (Skyline College) had two hits with a double, triple and two RBI. Sam Kuchinski (University of Montevallo) reached base with three singles to contribute to the offense. Peter Brookshaw (North Dakota State University) had three walks with a stolen base scoring twice as he reached base. The Express had eight hits with zero errors on the field to take the win.

For their 12th win in a row the Willmar Stingers defeated the La Crosse loggers 14-4. The Stingers scored six runs in the third inning with an RBI double by Drey Dirksen (Augustana University) and Jordan Sagedahl (South Dakota State University). Brett Bateman (University of Minnesota) ended the inning with a home run to score two runs. Dirksen had one hit with two RBI and a stolen base, scoring three times he reached base. Sagedahl had two hits with two RBI. Bateman also had two hits with a double and three RBI. Nolan Kemp (University of St. Thomas) closed the game throwing the last 3.2 innings with seven strikeouts.

The Kenosha Kingfish won their third game in a row as they defeated the Wausau Woodchucks 13-11. The Kingfish struck first, scoring three runs in the second inning with an RBI single by James Oman (Chipola College) and Parker Stinson (Indiana State University). Oman had three hits with a triple, walk and four RBI. Stinson had two hits with two RBI. Santiago Gomez (San Diego City College) earned the win on the mound throwing five innings with two strikeouts. The Kingfish generated a total of 16 hits with nine walks to take the first game of the series.