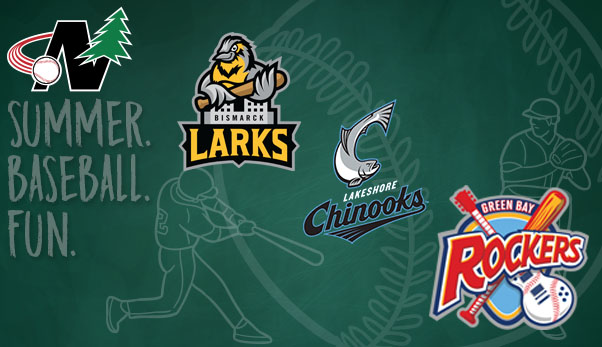 Rochester, Minn. – The Northwoods League has announced that Charlie Mauer of the Bismarck Larks, Matt Menzl of the Lakeshore Chinooks, and RJ Taylor of the Green Bay Rockers, have been named the 2022 Northwoods League TV Announcers of the Year.

“We’re happy to recognize this year’s TV Announcers of the Year. Congratulations to Charlie, Matt, and RJ. They did an excellent job covering their games in a positive, informative, and professional manner. All three of them set a high bar for announcing Northwoods League baseball games, which is a credit to them and the organizations they represent,” said Northwoods League Great Plains Division President, Glen Showalter.

The Northwoods League All-Star Game, Major League Dreams Showcase, Playoff games, and the Summer Collegiate World Series, were all available exclusively on ESPN+ in 2022. In addition, the League streamed approximately two championship season games per night exclusively on ESPN+, which resulted in more than 160 games that could be viewed on the ESPN+ platform during the Northwoods League season from Memorial Day to mid-August.

The Northwoods League webcasting operation has continuously strived to improve the quality of its broadcast content since its inception well over a decade ago, and a part of that effort in recent years has been transitioning from simulcast audio operations to dedicated tv announcers for the game productions. All Northwoods League teams have dedicated TV announcers for the game day productions, in addition to producers, directors, and camera operators, and all the broadcast quality equipment that has been a valuable part of the League’s four camera high-definition webcasting stream of each Northwoods League game for years.