BISMARCK, ND – If you’re one of those fans that likes a good ol’ fashioned pitchers duel, Friday night’s game was your game.

If you’re a fan that prefers to see hit parades with the ball flying every which direction, the eighth inning was your inning.

The Larks took down the Mankato MoonDogs by a final score of 10-0, but the final score probably doesn’t give you enough information on how the game unfolded.

Innings 1-7 essentially stand alone from the final score as Carson Selin and Ricky Digrugilliers engaged in one of the best pitcher’s duels we’ve seen all season.

Through seven innings, just five total hits had been registered in the ballgame, and not a single run had crossed home plate. The game was gridlocked at 0-0.

After giving up at least three earned runs in each of his previous four starts, Selin completely turned things around. He dazzled through seven innings while allowing just three hits, three walks, and recording three strikeouts.

For the MoonDogs, Digrugilliers was just as impressive as Selin. He breezed through his seven innings as he allowed just two hits, one walk, and notched seven strikeouts.

The duo wowed the crowd on Friday night, but it’s unlikely that many fans saw it coming. Both pitchers entered the game with earned run averages that do not jump off the page.

Entering the game, Digrugilliers had a 5.13 ERA while Selin’s was north of six at 6.51. Both pitchers left the past in the past and produced exceptional starts.

Both pitchers surpassed the 100 pitch threshold in the seventh inning. Per Northwoods League rule, pitchers cannot start a new inning once they have gone over 100 pitches. Both guys had to turn the game over to their bullpens and take no decisions.

In the top of the eighth, the Larks handed the ball over to Chris Roycroft, and he picked up where Selin left off. A quick 1-2-3 inning got the Larks back in the dugout as they prepared to face MoonDogs reliever Andrew Fisher.

The bottom of the eighth inning took everything that you knew to be true about this game and threw it out the window.

Jeff Mayes led off with a single,and Wyatt Ulrich followed with a strikeout. After the at bat, there would be seven hits, two errors, and two pitching changes before the next out was recorded.

Scooter Bynum, Ryan Anderson, and Luke Horanski each singled off of Fisher to plate two runs and give the Larks a 2-0 lead.

Jimmy Ward relieved Fisher, but the floodgates had already opened up too far for him to close. Ward surrendered hits to Quinn Irey and Ulrich, and bases-loaded walks to Spencer Gillund and Brandon Lankford. Ryan Kreidler also made errors on back-to-back plays off the bats of Philip Jacobson and Mayes, resulting in two more runs for the Larks.

Still with just one out, Ward turned it over to Logan Alleman. Alleman surrendered singles to Bynum and Anderson before walking Horanski and getting Irey to hit into a 5-2-3 double play to end the wild  inning.

In all, the Larks sent 15 hitters to the plate, banged out eight hits and put 10 runs up on the board.

Despite sitting for nearly 30 minutes, Roycroft went back to the mound and shut the MoonDogs down in order to give himself and the Larks a 10-0 victory.

In the middle of Selin’s and Digrugilliers’ duel, the crowd at Bismarck Municipal Ballpark was treated to the final Sanford Health Home Run for Life moment of the inaugural season.

Nearly two years ago, Karla Fischer was enjoying a day on Lake Sakakawea with some friends when she suddenly lost consciousness. Thanks to the immediate action taken by her friends and emergency personnel, Karla was able to make a full recovery after spending four four days in the Intensive Care Unit. The Bismarck Larks and Sanford Health are honored to have shared her story and help her complete her Sanford Health Home Run for Life.

The Larks are out of playoff contention, but the Birds were able to play spoiler on Friday night as Mankato battles for home-field advantage in the upcoming playoffs. The loss for Mankato, combined with Eau Claire’s win over St. Cloud puts the MoonDogs celebration on hold for at least one more day.

We’ve reached the final weekend of the inaugural season, and despite the struggles for the Larks down the stretch, they actually have some momentum going into this weekend’s tilt with La Crosse.

Saturday’s game between the Larks and Loggers is set for 6:05pm. 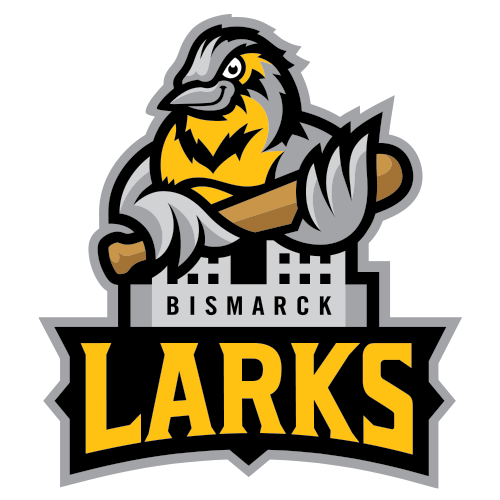