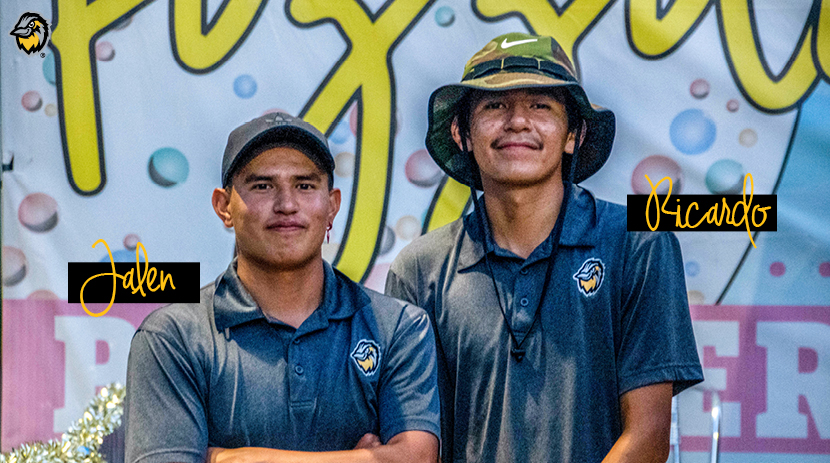 Not many siblings get the chance to work with one another and many would much rather not. But for Jalen and Ricardo Chase, that’s not the case.

The two brothers from New Town, North Dakota have worked alongside each other for as long as they can remember. From school, to sports and everything in between – they’ve been practically inseparable.

They attend the same college, take all the same classes and run together on the Northern State University cross country team in Aberdeen, South Dakota. And when it comes to work, they even decided to intern – together – in the same department, at the same place, right here at the Bismarck Larks.

Going to college, being teammates and working with one another has always been the plan for Jalen and Ricardo despite their three year age difference and other opportunities. Jalen was a highly-decorated high school cross country and track athlete, earning multiple state championship titles and a Class B record in the 3200 meter. His senior year, he quickly became a top prospect for numerous NCAA Division I universities including Kansas University, University of Nebraska-Lincoln and Stanford.

But when it came to decision time, Jalen decided to remain a unit alongside his younger brother, Ricardo.

“We both could have gone our separate ways, but doing things together makes us stronger,” says Jalen. “We help each other and rely on each other.”

And rely on each other they do. Both brothers have different skill sets and personality traits, that each enhance the other.

“Ricardo is a mellow process thinker. You tell him to do something and he will think through every detail,” says Joey Chase, father to Jalen and Ricardo. “Jalen is the doer. He is always going, going, going. His work ethic is unmatched.”

“They truly are the perfect pair,” says Peter Oakland, Bismarck Larks ballpark operations coordinator. “They hold each other accountable and push each other to be the best.”

“They both have this energy about them that makes you want to succeed,” says Aspen Eslinger, Bismarck Larks game day team member.

Growing up on the Fort Berthold Reservation, Jalen and Ricardo saw firsthand the hardships on the reservation. Thus being a driving force behind their will to succeed and to help others.

Jalen and Ricardo are both studying sports marketing and administration at Northern State University. They hope to one day work in the event and staffing field for a professional sports team, maybe even the same team.

“We are living our best life with each other,” says Ricardo.