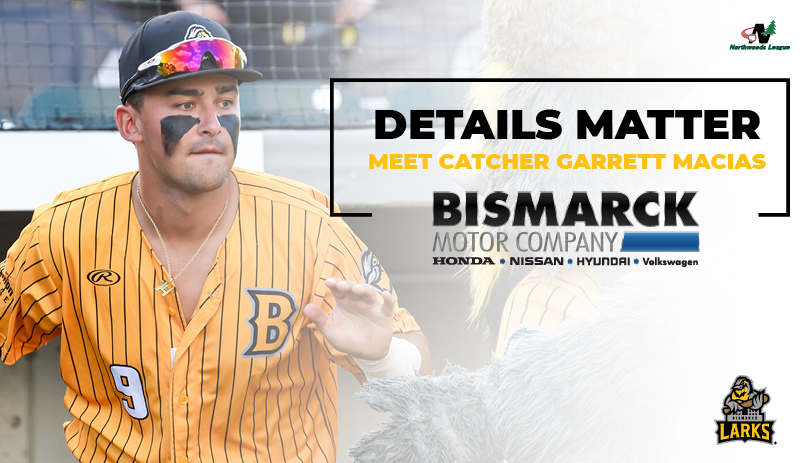 Garrett Macias has seen many different cultures all over the world, yet no matter where he is, his love for the game remains the same.

Garrett comes to Bismarck a native of Riverside, California after completing his Redshirt Junior year with California State University, San Bernardino. Although he considers himself a “Cali kid,” Macias is grateful for his time spent across the Pacific Ocean. After growing up in California, Garrett and his family moved to a small city outside of Hiroshima, Japan called Iwakuni. Garrett spent six years, from 7th to 12th grade, experiencing a whole new culture.

“The experience of living in Japan was rewarding,” Garrett said. “I loved the culture and the people always made me feel welcome. The ability to travel all across Asia was a true blessing.”

After graduating high school, Garrett made the choice to return to his native state to play collegiate baseball. In 2022, Garrett had a fantastic season for CSU San Bernardino. He hit for an impressive .310 batting average while driving in 25 runs and sent six balls over the fence.

Now over 1,500 miles away, Garrett is working to improve his game this summer with the Larks. Garrett is one of five players on the Larks from CSU San Bernardino. Shortstop AJ Barraza, first baseman Daryl Ruiz, pitcher Luke Hempel, and pitcher Chris Hernandez all made the 23-hour long car ride with Garrett to Bismarck.

“Having my teammates from college here with me has made this summer ball adventure even more fun,” Garrett said. “These guys are like family and after spending so much time during the season together it’s cool that we can all travel to another state to play the game we love.”

As of August 8, Garrett is hitting .298 with 39 hits and 15 RBI. He’s launched three balls out of the park, including a grand slam in just his second game as a Lark.

This story appeared in Edition 8 of the Larks FREE Playball program.

If details matter to you, think Bismarck Motor Company for all your car detailing needs. Check out their new location in Mandan at 905 East Main Street Mandan, ND