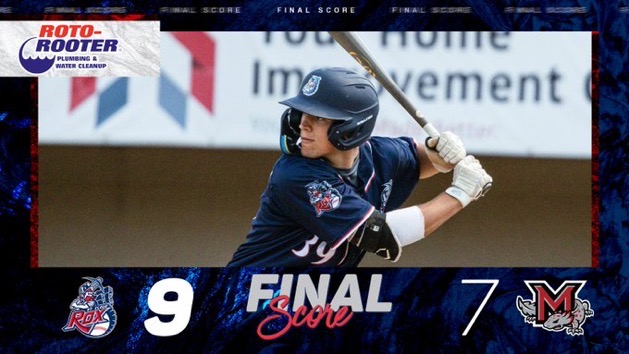 Ike Mezzenga (Minnesota) stepped to the plate with two outs and a runner on first in the bottom of the ninth with the game tied at seven. Mezzenga launched a ball to right field and as it cleared the fence, the Rox were walk-off winners for their sixth straight victory.

The walk-off home run was Mezzenga’s second of the year and he finished the day with four RBI’s. Mezzenga has at least one hit in all eleven games that he’s played with the Rox and put up 15 RBI’s this season.

Jack Steil (North Dakota State) also had a home run on Wednesday night. Steil helped the Rox get off to a hot start with his first long ball of the season and also knocked in a run in the eighth to put the Rox up by one.

Luca Trigiani (St. Joseph’s University) and O’Neill Burgos (Southern University) each added two hits in the game as well. Trigiani came through with a run in the sixth and an RBI in the seventh to boost the Rox late.

On the mound, Nick Hyde (Western Carolina) put together his second straight solid start. Hyde went five innings, allowing just one run and struck out six batters to help the Rox out to an early lead.

The Rox play their final regular season home game on Thursday against the Minnesota Mud Puppies, looking for another sweep. First pitch from the Rock Pile is scheduled for 7:05 pm.